Halfway between Adelaide and Melbourne, Mount Gambier makes the perfect stopover between the Adelaide festivals and the Melbourne International Comedy Festival 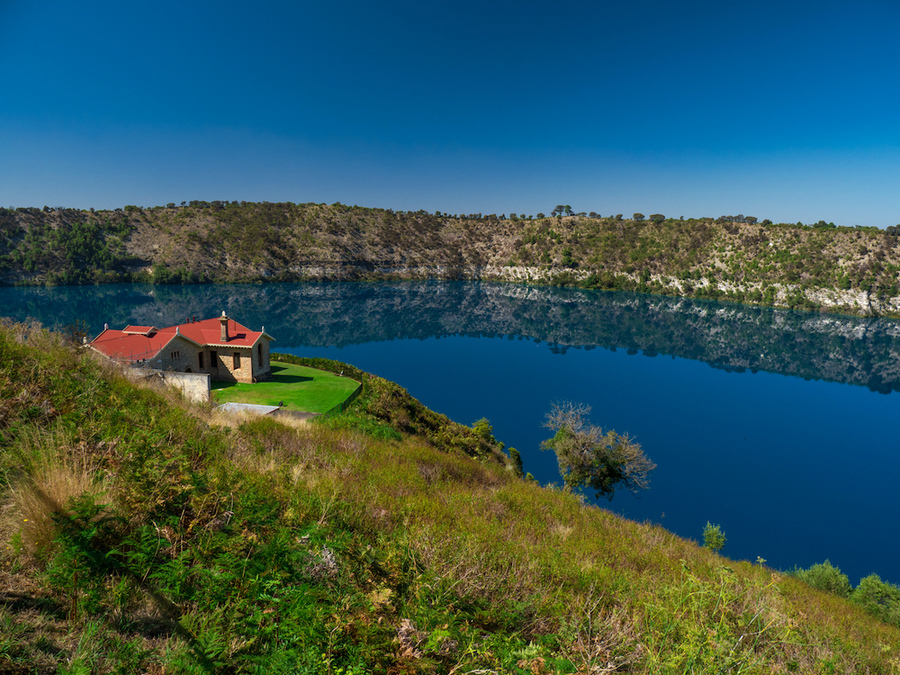 Driving through the farmland of South Australia’s southeast can be monotonous, even for the most ardent “I Spy” enthusiasts. So it’s a welcome relief to turn off the Dukes Highway at Keith, some two-and-a-half hours into the journey, and swap golden fields of canola and wheat for the lush green vines of Padthaway. But that’s just a taster for what lies slightly further down the road in Coonawarra.

South Australia is not short on wine regions, so one has to be quite special to merit a four hour drive. Fortunately, Coonawarra fits that bill. Australia’s 'other red centre' is famous for the bright red Terra Rossa soil that sits above a limestone base, and produces some of Australia’s most sought-after wines.

Though just 20 kilometres long and two kilometres wide, Coonawarra is home to 25 cellar doors. And because of the region’s linear nature, there’s no need to detour from the highway for a tasting. Despite the unwieldy name, the wines at Brand’s Laira are eminently approachable and the cellar door-only riesling is crisp and refreshing with hints of green apple. But Coonawarra is famous for its reds and soon I’m being poured a glass of deep crimson cabernet sauvignon. “This is the most popular style around here,” the cellar door attendant tells me. As a perfume of blackberries and spice fills my nostrils, I can see why.

Brand’s Laira has plenty of history, including an 1893 planting of shiraz vines that represents the oldest block in the region. The 'Brand’s' part of the name comes from Eric Brand, who set up the current winery in 1966. The cellar door is built around the old stone shed in which he used to host fellow winemakers and guests like James Halliday, asking each of them to bring something for his collection. Today the walls are still lined with fruit crates full of dusty bottles from all over the world, but I’m happy with my glass of 1968 Vines cab sav as I tuck into a ploughman’s lunch on the wooden bench.

As for Laira, it refers to the favourite ship of the vineyard’s original owner. It’s a timely reminder that even though Coonawarra is 60 kilometres from the sea, it’s part of the Limestone Coast region and there’s still a strong maritime influence. The sea breezes bring cool nights that lengthen the ripening season and result in thick-skinned fruit with plenty of flavour.

So I’m grateful when I pull up at Coonawarra Bush Holiday Park, a collection of tents and cabins set between rows of healthy vines and dense bushland. The park is also home to several bubble tents, which I discover are essentially inflatable glasshouses with hexagonal panels. Lying in bed, I enjoy the day’s latent warmth as I watch the colour slowly drain from the sky.

The minimal furnishings include a makeshift curtain for privacy, a kettle and, most importantly, a wine fridge for the day’s purchases. And while clouds obscure the night sky and prevent me doing any bedbound stargazing, I’m happy to start the next day by watching a golden glow suffuse the large gum tree just outside the tent.

It’s less than an hour’s drive to Mount Gambier, which has one of Australia’s best regional art galleries right in the centre of town. There’s a new show being installed in Riddoch Art Gallery’s exhibition spaces (housed in a former theatre), so I head upstairs to the Media & Virtual Reality Studio. There, I don an Oculus headset and explore four young Aboriginal Australians’ visions of tomorrow in Future Dreaming.

Next door, the dress circle of the old theatre has been converted into a cinema where a spectacular film tells the story of the surrounding landscape through geology and dreaming stories. Even more striking evidence of the area’s volcanic history sits on the edge of town in the form of the Blue Lake, a wide crater lake that turns a brilliant cobalt blue over the warmer months. There’s no swimming allowed because the town’s water supply is drawn from the lake, but fortunately there are plenty of other options nearby.

The paddock that houses Kilsby Sinkhole looks like any other until I’m standing on the edge of a giant hole in the ground, staring 15 metres down at the water. Because the water is a constant 15 degrees, I need to put a wetsuit on before walking down a channel cut through the rock where I can still see small marine organisms embedded in the wall.

“It’s a bit murky at the moment,” my guide Jen says as I hop in. “We don’t know why but it gets this way for about a month a year.”

As a result, I get two surprises. The first is a pocket of cold water that immediately forms on my back. The second is seeing my shadow on the sinkhole floor 20 metres below me. It’s surrounded by rippling beams of light that cut through the turquoise water, and a hanging garden has formed nearby on the wall that gets the most sunlight. If this is murky, I can only imagine what it looks like when it’s clear.

The Limestone Coast is riddled with cave systems, and this one continues well below the surface. The entry was formed by a collapsed roof, and I can see slabs of limestone on the floor as I swim past sincarids (tiny shrimp) and one very happy looking turtle. At the far end of the sinkhole, the floor disappears into a deep blue gloom. This is the only sinkhole in Australia open to recreational scuba divers, and it goes 67 metres down. But I’m more than happy to stay where I am and watch the light playing on the water.

Limestone defines this region of the world, and when I reach my accommodation for the evening I discover that it’s built from giant limestone blocks. There was a time when entering the Old Mount Gambier Gaol was no cause for celebration, but for the last ten years it’s been run as comfortable accommodation.

The small cells used as dorms give some idea of what it used to be like, but these days there are also cosy common rooms, bright chalk drawings and even a meditation garden. The heavy iron door and bars on the window in my room serve as reminders of its former purpose, but I’m pretty sure the bath with a giant jar of epsom salts is a new addition. It’s a good one, too.

From 20-29 March, the Mount Gambier Fringe provides the perfect excuse to stop over for a few days on the way to the Melbourne International Comedy Festival. Artistic program manager Louise Adams gave her first ever public performance at the Adelaide Fringe, and she brings a little of that magic to the Mount.

Now in its fourth year, the Mount Gambier Fringe takes over town with 49 shows at 20 venues over 10 days. Opening night is the Lift Off street party, which closes off the town centre for the Pied Piper Parade before the streets are given over to roving performers, street food stalls and pop-up bars.