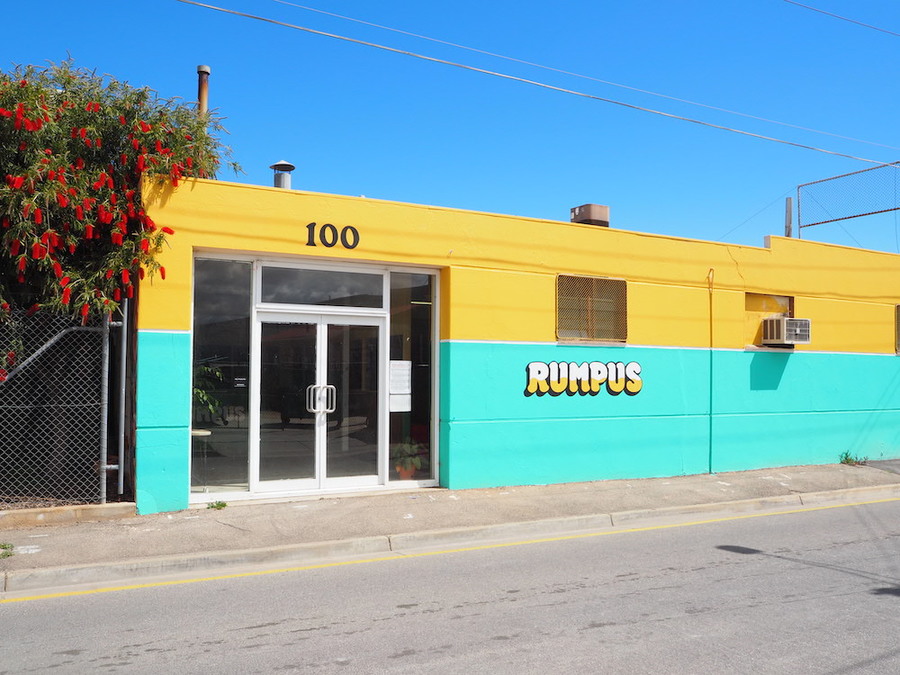 "Fourteen years ago," says Nescha Jelk, "when I was a first-year student, I remember going to some amazing DIY pop up venues during the Fringe – venues that were presenting bold experimental work that blew my first-year-drama-student mind."

Jelk is co-founder and facilitator of RUMPUS. Founded in 2018, RUMPUS is a new collective-driven performance and work space dedicated to supporting local artists. “Work by companies like Border Project or Black Lung from Melbourne, pieces of new writing and devised theatre that felt so far away from what I would normally see in Adelaide outside of festival season.

"After the Fringe, the hole that these spaces left behind felt all too obvious. And through my studies, I would hear teachers talk about the days of Red Shed, one of the last artist-run companies that had been in Adelaide." As Jelk continued her career as a professional artist, she became connected with local artists. "I saw the need for a space like this for further reason: to support and strengthen Adelaide’s independent theatre community," she says. "For a long time, independent artists have been facing the same struggles alone. It made sense to me that, as other artists have done in history, by banding together and sharing resource and labour we would be stronger and make better work.”

So, with co-facilitators Rebecca Mayo and Yasmin Gurreeboo and a whole community of independent artists on board, RUMPUS was born. Kitted out with vintage furniture from sports clubs, deceased estates and old pubs found on Gumtree and Facebook marketplace, and with the help of grandma’s ute and community working bees, the space was transformed. Local artist Meg Wilson worked with the team to design the signature kitschy-cool vibe and make it a place where artists can work, rehearse and perform.

“We were inspired by the photography of Warren Kirk, who captures the Australian suburbia that is being faded out by gentrification – corner store delis, community halls and people’s pattern-carpeted lounge rooms," says Jelk. "We wanted the space to feel like your grandad’s RSL hall had a child with your grandma’s rumpus room. We wanted it to be a community space that felt homely and didn’t take itself too seriously. And we wanted it to feel DIY – which was quite easy because it was all very DIY, given most of our budget went towards buying our lighting and sound equipment.”

And for Jelk, Adelaide is perfect for such a space. With a supportive and co-operative theatre community making amazing work, and audiences with an appetite for independent work, it made sense. “The Fringe is a festival of work by largely independent artists, and it is far more successful in Adelaide than it is in Sydney or Melbourne," she says. "It makes sense to me that there is currently an untapped audience hidden in Adelaide for this work throughout the year.”

For their first Fringe season, RUMPUS has a lot on offer. “[It] is going to be a lot of fun. There is Only Human by Sophia Simmons presented by SAYarts and directed by Ruby Award-winner Claire Glenn. It's a work that imagines a future where the line between humans and AI have become blurred. Queer House Rules! by young director/playwright Guy Henderson and presented by Nicholas Howson tells the story of a share house with queer millennials facing eviction. Fracture is a new work by an exciting emerging artist Alice Marsh, who has been recently selected for Frantic Assembly’s Summer School in London. Dead Gorgeous: A True Crime Clown Show is presented by Madness of Two, which is Ellen Graham and Jamie Hornsby. They presented a showing of the work last year at RUMPUS as a part of our Baby Plays program. As true crime fan myself, I can say that I found it hilarious.”

RUMPUS solely features the work of young Adelaide artists and they’re one of the few venues that don’t take a cut of box-office sales. Instead, artists rent the space and keep 100% of profits, a rare thing in a Fringe as large and international as Adelaide. Such shows and venues run on the smell of an oily rag and so if you’re a keen Fringe goer, it’s important to buy tickets to the small players and keep the local scene vibrant.

“Having the Adelaide Festival of Arts and Fringe Festival transform Adelaide every year is an incredible thing for any artist in Adelaide," Jelk says. "RUMPUS, as a young organisation, would never have gotten as far as it has without the support of our community, general public and from companies like Vitalstatistix, Patch, State Theatre Company of South Australia, Windmill and Brink. And, dare I say it, but I think RUMPUS is a really special thing in Adelaide for young independent theatre makers right now.”