Now in its third year, Sanaa Ink is bringing their largest program yet 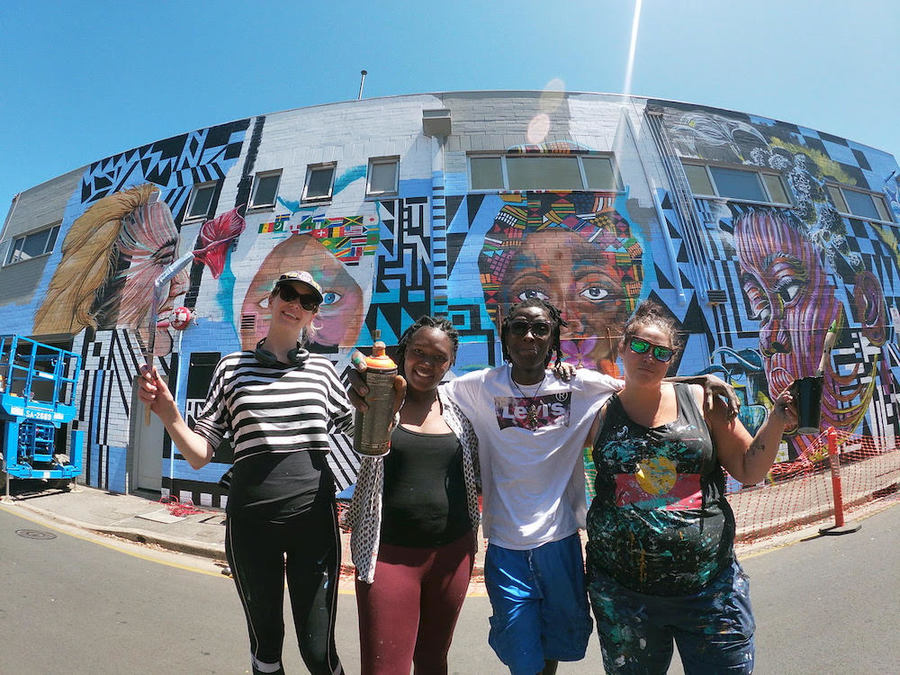 The arts transcends boundaries of privilege and language. Victoria Lewis, founder of Sanaa Ink, first noticed the positive impact arts had in the communities of east African countries while filming the short 2015 documentary Slum Ballet. Lewis threw herself into the arts scene in each city she visited: “I had arranged to meet a number of artists before travelling over… I met with five street and visual artists, including some I met randomly at arts hubs and centres.”

These serendipitous meetings allowed Lewis to travel through Tanzania and Kenya, where outside of Nairobi she stopped in Kibera, one of the largest urban slums in Africa.

Throughout the trip, one point was clear to Lewis: in the face of extreme poverty, lack of resources and insufficient housing, artists continued to create art and use it as a tool for progressing their society forward. “In African countries the artists are often the community leaders so they’re using art as a form to impact the next generation,” she says. “It’s very different to how art is used here.”

The social impact was intrinsic to artists’ work with the younger generation. “Whether the artists are teaching dance, or street art or music, they’re working with young people to positively impact their lives,” she says. “It happens everywhere.” Working with those younger than them garners a lot of respect within their circles, even early in their careers. “Some are the best artists, but some are emerging and going up, but are still really respected for the work that they do,” Lewis states. “I still think art has a long way to go over there but if you look at the things they’re doing in their communities, it deserves a lot of respect.”

Lewis started Sanaa Ink to bring African artists to Adelaide Fringe and enrich our understanding of how art is perceived. “It was on the back of [the 2015] trip that I thought I want to bring some of these artists to Australia,” Lewis says. “Each year I go back [to Africa] to build my networks and sponsors and grow the program.” This year sees the program venturing out of Adelaide for the first time. There are school workshops, exhibitions and public art collaborations in Port Augusta and Whyalla.

Bringing artists to Australia gives them opportunities and skills they can take back to their own communities to expand their recognition. “I give them an opportunity to public speak, or run a workshop so when they go back they can capitalise on those opportunities,” says Lewis. “It helps with their career projection, and opens their eyes to what they can do back in their own countries.”

Beau Graff is a visual artist from Senegal who will be travelling to Australia for the first time with Sanaa Ink. “It was a dream to participate in international festivals, and today Sanaa gave me that opportunity,” Graff writes. “It will be my first trip abroad and its an important opportunity for me because it’s an opening, it will be a moment of sharing and gaining experience.” Graff is highly respected in his own community, and recognises the impact his art has on his local community. “Graffiti is more social and spiritual,” he states. “People are starting to listen to this art form and I am being asked by many young people about the work I do.”

The visual artists Lewis is bringing over will have the chance to leave their mark on Adelaide with several collaborative public art pieces. Local artists Jasmine Crisp, Jake Holmes and Jimmy Smith will work with Sanaa artists to create three murals in the CBD. These murals will be part of Adelaide Fringe’s Street Art Explosion for years to come.

The full Sanaa Ink program also includes school workshops, an artist talk, a visual art exhibition, a storytelling evening incorporating poetry, performance and dance, and a small street party in Mill Street. Graff is particularly excited for how his experience will impact those in Senegal upon his return. “This trip will serve as an example of these young people to believe in their work and encourage them to continue to pursue their art talents.”