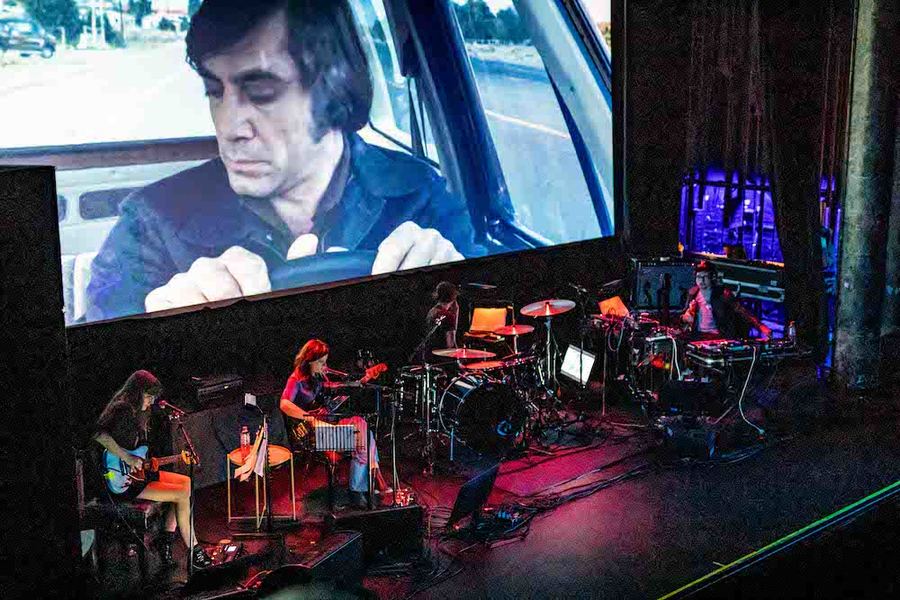 Three Academy Award-winning filmmakers will have their works revived by original scores from Australian bands Tropical Fuck Storm and The Shaolin Afronauts. Performing live accompaniments to high-impact films No Country for Old Men and Mad Max, the bands’ alternate approaches add a fresh fervour to these iconic films.

“My idea was to base the score on French film Elevator to the Gallows where Miles Davis did the soundtrack,” says Gareth Liddiard of Tropical Fuck Storm.

“He and his band just played live to a screening of the film during recording. Then what they did was take that recording and back it up five seconds because that was the average reaction time for the musicians to play to whatever was happening on screen.

Playing on the fly isn’t an ability many musicians can attest to having, but Liddiard says the musical idiosyncrasies between himself and the members of Tropical Fuck Storm make for a “perfect collaboration”.

“Usually I’ll come up with really general pointers, like the Miles Davis thing. Then there will be practical shit like key, and then I’ll come up with maybe a little melody that we can sort of scratch out. And then I just like to hand it over to the girls. They just figure it out, they’re really good and I really trust what they do.”

The experimental rock band were approached by audio-visual events crew Hear My Eyes to score The Coen Brothers’ slow burning crime thriller, No Country for Old Men, in 2018. Founding members Gareth Liddiard and Fiona Kitschin, who are known for their seminal underground punk band The Drones, had only formed Tropical Fuck Storm a year prior.

“Doing this actually helped us write the second record that we made last year. I’d say three or four chunks of music [from the score] wound up recycled and rejigged on our last record.

“With The Drones we had 20 years of playing together and we learned how to play structured shit and we learned to play mad free-jazz too. But we hadn’t done that with TFS because we’d only been together for a year, so it was a good chance to go head first into this,” Liddiard says.

The Melbourne four-piece is poised to play over two consecutive nights for RCC but they’re not the only ones scoring a feature-length film over the festival season.

Adelaide’s own instrumental powerhouse The Shaolin Afronauts are putting their spin on George Miller’s cult classic Mad Max for Adelaide Festival. The jazz collective are fronted by guitarist Dylan Marshall, who has mapped live scores for all three of Miller’s Mad Max instalments.

The Shaolin Afronauts were originally commissioned to perform at Melbourne’s Stonnington Jazz Festival by artistic director, Chelsea Wilson. Fans will be quick to recognise signatures from the band’s usual repertoire, which Marshall adapted to fit the film’s tone and aesthetics.

“We’ve taken a lot from our first two albums and a couple from our third one, so a lot of it is actually our own material," Marshall says. "I took our recordings and mapped them out to the movie… and then we could tailor the way we performed it or the arrangements of it to match the shape of the movie. So for people who know our music, they’ll be hearing a lot of the music they already know."

But he’s also stayed true to Miller’s vision. Having heard in an interview that Miller’s intention was to partially replicate the air of a silent film, decisions were made to honour the audio-visual aspects of silent cinema.

“There are a few bits where we made the decision to play our music and let the movie play like a silent movie," Marshall says. "So you’ve got the music supporting the action but you haven’t got any of the incidental dialogue. There are certain parts where you’ll have dialogue with music, as normal, but then there are other things that are almost like a silent film.

“It was an interesting process to go through," says Marshall. "In a lot of ways it gives us the chance to do the other side of the Afronauts. We have our dance stuff that we play a lot of but there are also the more textural qualities in our music that we’re able to explore by playing along with the movie. It’s enjoyable for us to do from the point of view that we can delve into the depth of emotion we can bring out with our instrumentation."