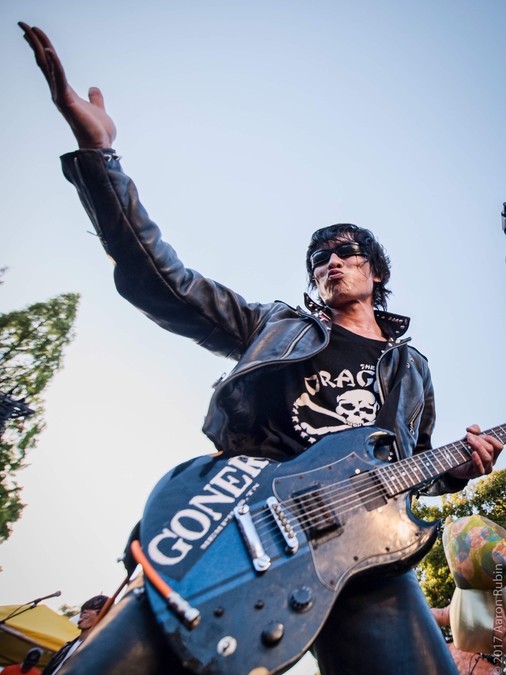 Emerging from the depths of 70s recession and disco, Japanese punk spawned a following the likes of which Japan had never seen. Merging art and fashion, music and film, old and new, anarchism and determination, punk put the mic firmly in the hands of the nation’s youth. Tapping into a wellspring of energy and optimism, punk offered a way to step out of the shadows of deeply held tradition and prescribed trends, inspiring the youth to ‘Do-It-Themselves’ and write their own futures.

The Japanese have never been short of finding reasons to party. Traditional matsuri (festivals) can celebrate anything from the changing seasons, coming of age, harvests, blossom, fish or fishermen, as well as paying thanks to the plethora of local deities that inhabit every corner of the island nation. Anyone familiar with the movies of Studio Ghibli will know this to be an unending list of party opportunities.

Matsuri are usually based around a key ritual symbolic of the festival’s nature and purpose – like swimming a stretch of dangerous open water, riding giant logs down a hill or running naked through the streets of your hometown.

RCC is set to transcend the mortal realm this year as Japan’s high priests of punk rock descend on Adelaide to subvert convention by mashing together the traditional Japanese matsuri with Tokyo’s early 80s punk scene and pay homage to the powerful gods of Japanese punk rock.

Performing together for the first time outside of Japan are Tokyo’s very own leather clad rockers Guitar Wolf and the enthusiastically naked Jet Boys. The third point in this pyramid of punk rock transcendence is the very high priestesses of Japanese cool themselves, The 5.6.7.8’s.

Headlining both nights, The 5.6.7.8’s are the undisputed queens of Japanese punk – and iconic Jane Mansfield lookalikes. The 5.6.7.8’s were already indie music icons well before their performance on Tarantino’s Kill Bill Vol 1 introduced their infectious mix of 50s surfer rock, rockabilly and US punk to the world. With their beehives, guitars and go-go, they have continued to confront the myths surrounding Japanese femininity and identity through touring the world and growing in popularity and influence.

Recently signed to Jack White’s Third Man record label, something bands a quarter of their age would die for, Guitar Wolf seem unstoppable.  After 30 years, 13 albums and a non-stop world touring schedule, the band are continuing to punch out their high-octane performances with a sound that tips a hat to the Ramones, drifts close to experimental and often gets up front and personal.

People offended by nudity, vegetable cruelty and super intense live performances might want to avoid LVL 5 as the Jet Boys and their wraith-like lead singer Onoching take to the stage. Nudity, nunchucks, soy milk and the aforementioned vegetable cruelty will do little to distract people from the intensity of their hardcore punk rock performance that is sure to leave everyone sweaty, exhausted and with bleeding eyes.

But this matsuri isn't just about the music. Tokyo Jet Daze’s ritual to the god of punk has manifested itself in a ceremonial Seven Samurai vs Akira inspired cardboard clad battle choreographed by Australia’s very own cardboard warriors, Boxwars.

Zombie fans will be sure to swoon in the presence of Guitar Wolf’s Wild Zero zombie fighting skills and should be on the lookout for kendo master Seiji during the ensuring fray.

Adelaide’s Motorcycle Society will also be on show and are organising activities befitting the leather-clad Japanese rockers and their love affair of all things motorcycle and the road.

In keeping with the punk ethic, an exhibition of poster art drawn will adorn the battle lawns and stages throughout the weekend’s festivities. Rat Fink and 70s zine culture inspired, Jet Boys’ frontman Onoching’s weird and wild artwork is the band’s often lurid fourth band member and provides an enlightening glimpse into the mind of true punk rock artist and the history of Japanese punk rock. Throughout the weekend, Onoching will be on site to help print and convert any piece of clothing into merch, or you can select a unique piece of art to take home, to be tattooed onto your body or painted onto your ride.

While most people will come to the Tokyo Jet Daze weekender for the music, art and ceremonial cardboard battles, those who are seeking more culinary delights will not be disappointed with the raft of traditional Japanese festival food, BBQ and beverages that will surround the battle lawns.