Song and spoken word reach for the divine but fall short 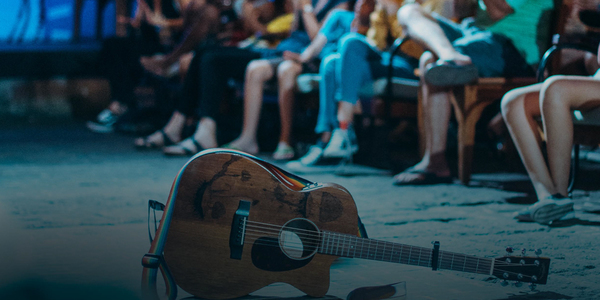 The Greek gods, like so many pantheons, are fascinating. Not because of their supernatural abilities but because of their fallibility. For all their powers, they are as prone to envy, avarice and lust as any mortal. Perhaps even more so, given their abundant leisure time.

The Flanagan Collective & Gobbledigook Theatre’s ORPHEUS and EURYDICE explored that human side of the gods, bringing them into the modern world with a mix of spoken word and song that was at times hauntingly beautiful. This megamix promises the same, but on a larger scale. Fourteen Songs. Four intertwining stories. It should be (an) epic.

Instead, the gods appear only as an anonymous mass while the main stories follow humans so bland they’re hard to separate. Instead of gods with richly rounded lives, we follow clichéd lovers who invoke and implore higher powers with platitudes fit for motivational posters.

It’s a shame, because the setting is conducive to a rapturous experience. The Black Box Theatre is turned into a sweaty, low roofed club, the audience huddled in the middle of the room as performers swap instruments and jump between stages arrayed around the room. Blues, rock and electronic club music alternate with spoken word and rap, and the performers venture into the audience as they deliver impassioned monologues. They know how to capture a crowd’s attention; unfortunately they couldn’t hold it.