The salad daze of an anxious performer 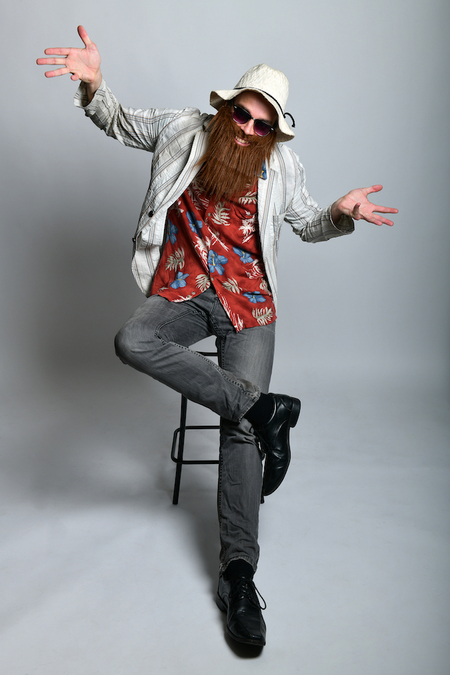 Joz Norris has spoken about his mental health problems and the impact upon him of performing. Yet he still needs to be creative to try to make sense of his discordant thoughts. So the compromise he's reached is Mr Fruit Salad, a manic, flailing alter-ego behind outsize beard, sunglasses and sun hat. Not a natural entertainer by his own admission, the rasping, barking and screeching Fruit Salad is nevertheless about to unveil his Big Bad Bombay Bicycle Burrito Boy comedy musical upon us. If he can just find his theme tune music …

Symptomatic of a breakdown, Fruit Salad keeps you voyeuristically invested through the show's endless false starts and diversions, with Norris unable to stop himself corpsing at the ludicrousness of the house of cards he's assembled. Assisted by the calming influence of Ben Target, albeit to a schizophrenic degree, Fruit Salad addresses the room like a benignly Welsh version of the League of Gentlemen's Papa Lazarou, scat-growling and ad-libbing through his non-sequiturs. Interacting with the crowd in a way that's physically intimate and intrusive but which retains an emotional distance, he's a socially inept, scattershot blunderbuss, apparently destined to remain lonely.

After a while though, he starts to recede, with Norris actually opening up about his own life: the eccentricities of his parents, the secrets of his grandparents, his preoccupation with a self-scuttling fictional character and his misdemeanour at a previous festival. He leaves some daftly enjoyable, absurdist clowning with a darker hinterland.