Review: For Now We See Through A Mirror, Darkly

An ingeniously designed but determinedly weird depiction of a mystical world 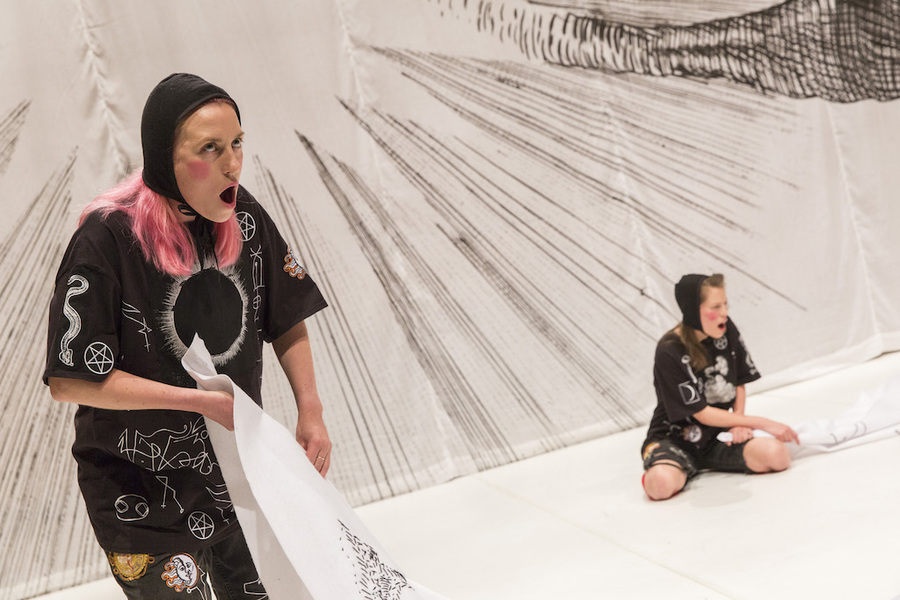 This ingeniously designed yet arch, peculiarly unsatisfying production, presented as part of the Made in Scotland showcase, is the work of the the Swedish-born, Glasgow-based choreographer and performance-maker Louise Ahl (who also goes by the tongue-in-cheek name Ultimate Dancer). The cast consists of two women and a man clad in black bonnets and tops loaded with symbols, shorts and red knee-high socks. Their cheeks are rouged and they clutch white blankets that are also adorned with symbols. A continuous voice-over identifies them as the characters of a Dying Sun, a Smiling Snake and Unclean Slime (the latter embodied by Ahl herself).

The narration switches between more than one voice but is always female. The talk is fairly constant, and the language used qualifies simultaneosuly as description, stage directions and dead-pan, comic-poetic metaphor. Body parts are treated especially vividly, with legs being spoken of as meat branches or the nether regions as tunnels of stink. Movement is either minimal—distracted faces scanning overhead, for example—or repetitive. There's also a spate of basic harmonic vocalising using cut up syllables.

While I admire how completely thought-out the stage world being depicted here is, I can't help but despair at how achingly clever it is. Ahl and company (including fellow dancers Jo Hellier and Peter McMaster) commit to conjuring a strange, unique quasi-mythological stage world pitched somewhere between mysticism and meaningless nonsense, but for me the performane grows increasingly thin. I feel trapped in my seat, wanting the experience to end sooner than its 50-minute running time. Does it lodge under my skin, or is it merely irritatingly patience-testing? A conundrum, then, and one with a pathetic ending.