The best theatre we saw at the festivals this year 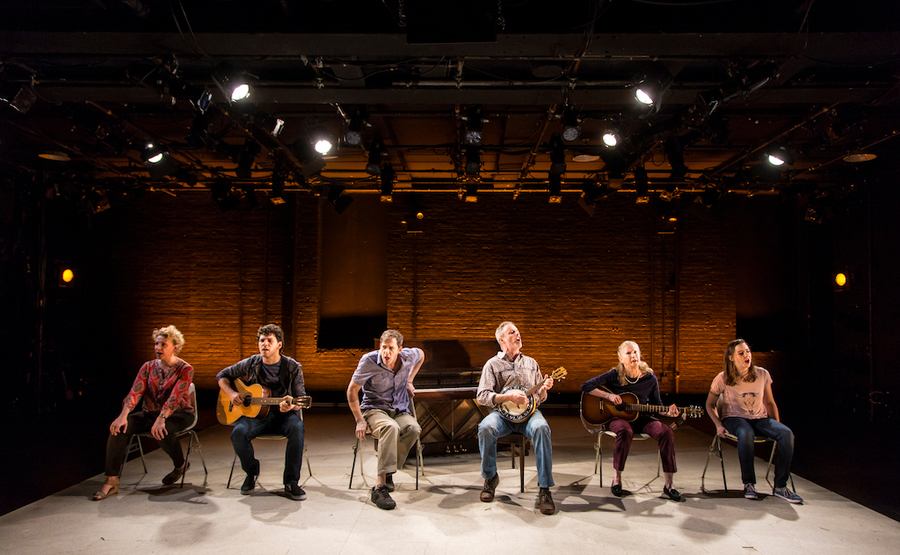 America is Hard to See

Uses a mix of interviews, hymns and original songs to explore the lives in and around a rural American community for sex offenders in Florida.

What we said: "The ensemble of six is exceptional. Playing multiple roles, these actor-musicians embody their characters with commitment and capture their emotional landscape in song. The production asks questions rather than gives answers, and one of those is the difficult request that the audience sees the characters as people rather than headlines and court cases."

What we said: "Their a cappella sound-storms are impressive enough (everything you hear is on the mic), but their creative take on the text also makes it richly resonant for a 21st century audience. Among the modern fears and frustrations they stitch together: social media angst, malignant narcissism, body dysmorphia, the rise of hate crime and urban alienation."

What we said: "With Gadd and director Jon Brittain drawing you fully into this modern, digitally-enabled nightmare, the comic is brutal and unsparing in his self-recrimination, his shocking, violent reprisals as impotent as his attempts to appease his stalker. The sheer crucible of hate and other raw emotions Baby Reindeer unleashes continue to disturb long after its conclusion."

Your Sexts are Shit

What we said: "Never shying away from the tongue-in-cheek humour of big brains getting their rocks off, Mars raises a toast to the human libido, elevating the carnal alongside the cerebral. In her hands, intimate human connection seems such a wondrous thing."

A theatrical storytelling show which alludes to issues of colonialism, migration and racism.

What we said: "Menzies’ careful construction of these worlds is a joy to experience, from her description of a Queen’s “tiny land rich in stories, music and song”, whose people are unsatisfied with their own wealth, so set out to find more in other lands already peopled by others, to that of the young man who must go to the land in the sky to find work."

An assessment of the UK's immigration system.

What we said: "Director Mark Maughan draws performances of humour and unaffected naturalism from Ery Nzaramba, Nick Blakeley and Emmanuella Cole as Serge, A and b, respectively. That b is a black British woman is a choice which emphasises this play's revelations."

A retelling of the story of the Manchester Arena bombing.

What we said: "10:31 MCR is a measured, nurturing piece of physical theatre. The soundscape repurposes social media posts and news reports for a glitchy reportage that is overwhelming as well as helpfully expository, and it moves the audience through the night of the bombing hour by hour, then minute by minute."

What we said: "Johnson excels in the physical comedy and spoken word. They have a distinct and excitable performance style and form a lovable rapport with their audience while exploring queer identity."

A monologue exploring the trauma and crisis of modern masculinity.

What we said: "The story alternates between the past and the present with Jamie firmly trapped in the middle. Gwyther’s storytelling is magnificent in its execution and engages with a topic matter that is crucially pertinent to a silence that still begs to be broken."

A play about childhood friendship amid the Foot and Mouth crisis of 2001.

What we said: "Pitch-perfect writing and solid, complementary performances from Howard and Jarvis create a beautiful work which rings with childhood nostalgia."

What we said: "There are light moments—the story of how Clayton-Wright got hold of the bright, white wedding dress he wears for the first half of the show is priceless—and there are darker ones, too; memories that make Clayton-Wright question how well his parents prepared him for the life he now leads."

LUNG's issues-based play immerses us within the world of young carers.

What we said: "Writer and director Matt Woodhead’s play balances the issues addressed with the humanity of these characters, and takes us through the everyday struggles young people in these situations face."

Seemingly sweet short stories with a sharp sting in the tail.

What we said: "An anthology of “folk jokes, anonymous anecdotes and stories from a simpler time,” Roots turns to traditional morality tales for our times. It’s another kind of rewind altogether: a reminder of the foundations that bind us together."

A one-man show communicating the urgency of mass animal extinction.

What we said: "Bailey’s performance, a fusion of elegant movement and emotionally charged monologues, is a compelling one. Vigil is heavy but hard-hitting."

What we said: "It’s self-evidently impressive and even the occasional mistake (a prop brought on backwards or a transition oh-so-slightly mis-timed) testifies to the continuous precision of the performers and the musicians accompanying them. "

A play about the passing and perception of time.

What we said: "Little happens, lots changes, but Steiner takes such care of his characters, allowing their anxieties, insecurities and oddities to emerge, that we follow suit."

A site-site specific exploration of consciousness and conscience.

What we said: "The darkness—which is firmly enforced, with no phones or smartwatches allowed to interrupt—proves a powerful tool in twisting the perception of reality."

Love, loss and the circle of life are put under the microscope.

What we said: "Birth uses physical repetition and the device of a journal, written by grandmother and read by granddaughter, to pull together the most mundane of everyday domesticity with the biggest of life moments—births, engagements, deaths—creating full and sympathetic characters through movement and direction alone."

An exploration of what it is to be a young woman.

What we said: Guiding the audience effortlessly between light and dark, humour and emotion, Hepburn’s writing is perceptive and evocative, and her delivery self-assured and well crafted. It’s an energetic and refreshing spin on spoken word."

A one-man show based on a true story of police brutality.

What we said: "Cameron’s script is complex and highly poetic, the metre and rhythm shifting subtly throughout in parallel with the unravelling of Alder’s tragic story. Blackwood accomplishes both the emotional heavy lifting and the mental gymnastics with aplomb."

A polemic about homelessness.

What we said: "At times this show feels like journalism – with verbatim interviews sprinkled here and there; at others like fanciful drama – with pleasingly absurd points of view added to the mix. But the team circle their thesis with confident purpose and impressive energy until it is impossible to dismiss."

What we said: "She focuses on the quality of the character rather than the quantity of material. And every so often a voiceover cuts through the comedy – Josephine and her mum talking about the man in their life. With initially reverent tones, these interviews unmask the caricature gurning and prancing about on stage."

What we said: "Unlike most standup dramatisations, Rouse brings an authenticity to the role that most actors can't. He's actually funny and the stakes seem real. But it's balanced."

Bryony Kimmings rises from the ashes of a shit year.

What we said: "The show also smartly dissects the roles that women feel pressured to play. In her rewinds, Kimmings picks up and discards different cultural scripts—the lover desperately clutching onto her man, the hippy Earth mother—as she tries on various versions of womanhood."

A monologue about falling apart.

What we said: "As Essie, Breffni Holahan is quietly remarkable. It’s an unshowy performance, yet it subtly captures each anxious shift of mood, each switch of gear between conversations."

Working On My Night Moves

A feminist journey through space and time.

What we said: "Te Aihe Butler’s sound design builds on the eerie, unsettled atmosphere. Often the sound comes from a radio which Croft wears tied around her waist. It moves with her and crackles in and out, feeling all the more overwhelming when it does come from the speakers."

What we said: "You can never quite tell where the narrative is going to go next, which is down to Tyler’s writing and the excellent performances from Lucianne McEvoy (Alannah) and Lisa Dwyer Hogg (Fianna) who bring endless energy to the stage."

What we said: "Shock treatment gives way to genuine hope, as Moxley wills the next feminist wave to wash in. G-L-O-R-I-OUS."

David Edgar's one-man show sees the 71-year-old playwright in conversation with his younger self to investigate what happened to the Sgt Pepper generation.

What we said: "Self-aware and pin-sharp, Edgar delivers a personal and political play that's more radical than his 20-year-old firebrand self could ever imagine."

An exploration of identity and love from Virginia Woolf's Orlando to the modern day.

What we said: "Roslyn very effectively binds Woolf’s Orlando together with her own story of love and identity, returning to particular motifs and lines throughout the performance to guide the audience through what could otherwise be dense and complicated material."

A sweeping state-of-the-nation play from the aftermath of the Ferguson uprising.

What we said: "Fluid and flowing, each monologue feels as if it is unravelling, unrushed. The conversation spans racism, structural violence, religion, gentrification, education, sexuality, fear. The longer people talk, the more they open up – or the more space they are given to reveal themselves."

A new musical about standing trial for treason.

What we said: "This is a lot of plot, but co-writers Maryhee Yoon and Cara Baldwin have carved a deft, concise story. Tension tick-ticks for a breathless hour that’s part courtroom drama, part wartime thriller – with plenty of time left for vital conversations about xenophobia and civic duty."

Laura Murphy uses her naked body and acrobatic skils to explore the history of female oppression.

What we said: "Blending standup, confessional and circus performance, Murphy takes us on a tour of her own body and the misogyny it engenders. From the man who comments on her armpit hair during a train journey to the lame standup routine by some American douche that Murphy lip-synchs to, this is a show kicking against the culture of female oppression."

An exploration of female anger and the claustrophobia of patriarchy.

What we said: "Intense and jarring as it jerks between air and ground, across timezones, and through countless soulless hotel rooms, Enough plays out in a sparse but clever set which provides a perfect stage for stylised, complicated dialogue hinting at something bigger than both women, a shifting in the ground beneath them."

Travis Alabanza makes a burger and shows us that we have the power to fight transphobia.

What we said: "Alabanza is a charismatic and witty performer, with a strong sense for what makes a dynamic and engaging piece of theatre. They are an excellent improviser able to react to anything that the audience member on stage comes out with."

What we said: "Doherty's physicality and tour-de-force voice work is the chief selling point. His transformation from character to character tends to be accompanied by wooshing sounds, which both evoke a kid at play but also evince a cinematic quality."

What we said:"She is a compelling performer with excellent physical skills that are further showcased by Nao Nagai’s lighting design. The narration, broken into short sections, draws on Jones’ life and another unnamed woman’s experiences of being Black in a predominantly white society."

Marcus Brigstocke's theatrical directing debut is a tale of family and addiction, based on his own recovery.

What we said: "Its clear-sighted immediacy and straightforwardly gripping drama are enhanced by the live setting. More than that, it's an intimate meditation on love, convincingly performed by real-life father and son Bruce and Sam Alexander."