Kate Wyver contracts Poltergeist Theatre to steal her a painting 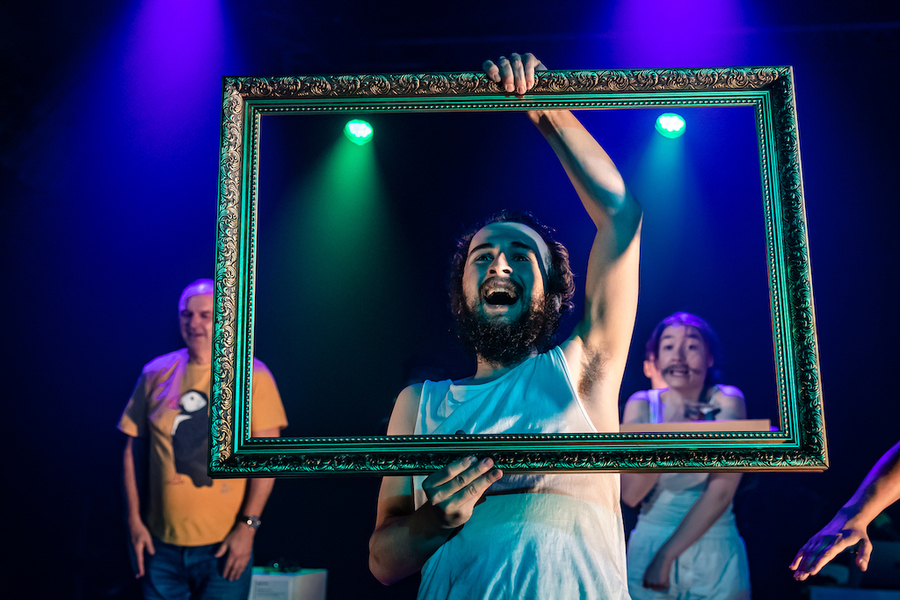 “There are cameras everywhere,” Jack Bradfield says as he cranes his neck to scope out security. “We need a distraction.” Our group huddles under a Dutch Master and we look nonchalant as a member of staff ambles past. We are in the National Gallery of Scotland. I have asked Poltergeist Theatre to steal me the most expensive painting in the room.

The company’s playful new comedy, Art Heist, sees three thieves attempting to steal the same work of art on the same night. Following the success of their tricksy alien hunt, Lights Over Tesco Carpark, Art Heist was picked up by Underbelly and is being presented as part of the Untapped award. Only a few days into the Fringe, it has already sold out for the whole run. I’ve brought them here to test their criminal skills.

They sniff out the money quickly. Alice Boyd heads straight for a da Vinci, Will Spence goes for an El Greco and Bradfield picks out a Rembrandt. Serena Yagoub, who joined the company for this show, sides with Boyd. A plump baby stares out at us from da Vinci’s 'Madonna of the Yarnwinder'. In 2003, the painting was stolen, Yagoub points out. “It’s got a story.” Staff at the auction house Christie’s told them that the story behind an art work is one of its primary monetary assets.

They agree on the da Vinci. A member of staff later confirms it to be the painting most likely to get the highest price at auction. I don’t ask what it would get on the black market.

Whether or not they’re master criminals, Poltergeist are definitely performers at heart; a lot of their ideas involve dress up. Builders. Jugglers. Clowns. Potential props are thrown around. A decoy painting. A getaway van. A real baby.

Boyd eyes up the crowd around us. “You can't make the distraction something people would run away from. It has to be something they'd run towards.” Rosa Garland widens her eyes: “Heart attack.” They run with it.“ We each pick one security guard to tell,” whispers Yagoub, “then one of us steals another painting so everyone chases after them.” “Meanwhile,” Garland adds, “someone swaps the real painting for a fake.” Spence says security protocols mean they’ll probably block the doors. “So you make it private,” says Charles Pidgeon, starting the process again, and their imaginations fizz in a different direction. “Dress up in hard hats and tell people the room is closed for maintenance, or restoration.” Bradfield nods excitedly. “You have to convince them everything's normal. Restorers are ignorable.”

Afterwards, Pidgeon says this echoes the devising process. They’d pick a gallery and figure out how to steal something from it. Games have always been important to their work and Art Heist is structured like one. “We all go through life piecing together our own story,” Bradfield says, “finding patterns where there aren’t any.” The show stemmed from the exploration of behavioural economics, examining how the brain makes decisions and makes sense of the world where there isn’t any. “So the show is framed like a game of Dungeons & Dragons, because people are inventing their story every second of the way.” The literal frames gave them the perfect structure to explore metaphorical ones.

“This form of theft is very romanticised in literature and films,” Spence says, with so many tropes and storytelling techniques anchored into it. As they were planning in the gallery, their speedy speech was littered with references to heist films as shorthand for specific plans: maybe this is an Italian Job, no wait, an Inside Man. These tropes, Pidgeon explains, are part of the pleasure of playing with the genre. “They are just funny stories that people engage with. And if we're trying to interrogate these ideas” – of behaviour, choice and curation – “it makes sense to use a genre that works with it. You want them to steal the painting, you want to be onside with the characters, because that's the good story.” I think back to what Yagoub said they learnt from Christie’s. “People remember things if they’re framed in stories.”

Outside, a group of men dressed as catering staff trundle past us with large trolleys of cardboard boxes. “You think these guys are gonna steal a painting?” Boyd wonders aloud. Yagoub grins. “Everyone,” they all lean in. “New plan.”