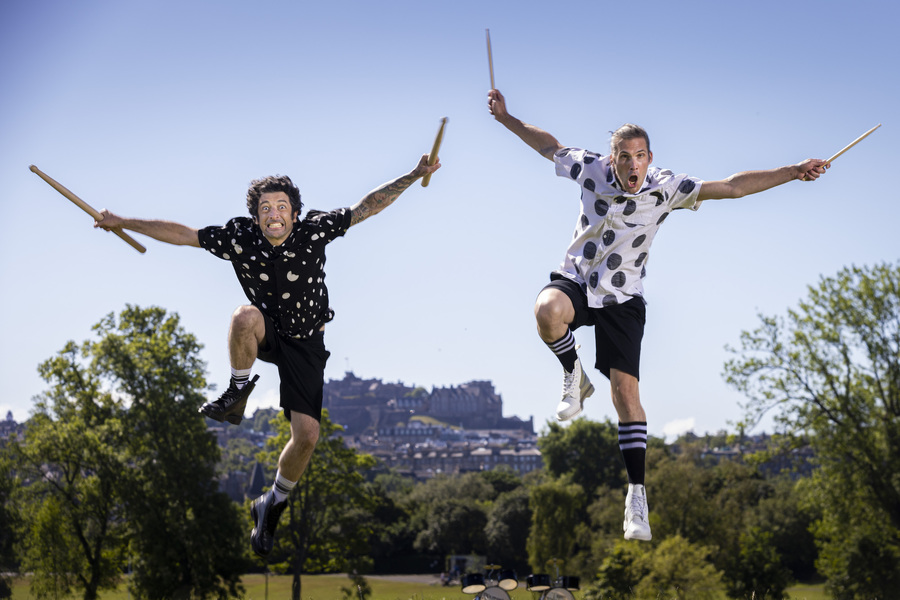 How have the past few years been for the both of you as touring musicians?

Fills Monkey have pretty much been on a world tour for the last 10 years. Because there’s no spoken words in the show, we can go to whatever country we want! Of course, the last couple of years were a bit different because we had to cancel most of the shows, especially our China tour which was scheduled for early 2020. We’re looking forward to being able to tour as easily as before, and can’t wait to come back to the Edinburgh Fringe.

For those unfamiliar, what is Fills Monkey and what is the story behind the project?

Fills Monkey is a drumming duet, made up of two very good mates. The show basically uses two universal languages – rhythm and humour  – and it’s accessible for everyone, from three years old to 100, and for every culture and nationality as well.

We play a lot of instruments on stage – acoustic and electronic. There are instruments the audience will already familiar with like drums and then there are also invented instruments like my bell suit which needs to be played with my hands, feet, and even my nose!

Can you tell me about your new show and what it involves? How is it different or similar to anything you’ve presented previously?

We already played the Edinburgh Fringe a few years ago with our last show. With this new one, we’ve kept the essence of Fills Monkey, so we still have the two characters on stage, two friends who love each other, but compete with each other. And we can’t help but play as many instruments in as many ways as possible (like playing the drums with tennis rackets or egg beaters). But where the last show was almost entirely rhythmic, this new one experiments with more melodic sounds too. Also the last show was more of a succession of little sketches, this one has more of a through narrative.

If you reviewed your own show, how would you describe it?

If I really have to review my show, I’d definitely say it’s insanely amazing. A must-see musical extravaganza! And look out for the best drummer of the two, he sits on the left!

I know you don’t use spoken words in your show. What is it about your music that you think people connect with regardless of language, age or background?

There is of course the music, and the large panel of influence we’re exploring during the show (rock, funk, jazz, electronic music, latin, African, Japanese percussion etc).

But I would say even more than the music itself, it's the rhythm. It’s fascinating to see from the stage how the power of rhythm unites people. I think it’s because rhythm is everywhere, from the beginning of our lives. In music of course, but also disguised in many other things like the ticking of clocks, the passing of nights and days, seasons etc… We also discovered that the type of humour we use on stage is a universal language too, as the comedy uses mime and physical humour, making it accessible to everyone as its not bound by any spoken language.

What are your thoughts on the Fringe in general and how do you feel about being a part of it this year, especially during the big return?

We’re actually so excited to come back to what we see as the biggest festival in the world! Especially after these past two years. We’re really proud to be performing every day at the Pleasance. It’s a beautiful venue that we’ve dreamed about returning to, so this year is a dream come true.

What else are you looking forward to seeing or doing in Edinburgh in August?

Of course it’s a formidable occasion to see other shows and visit the city. But the show we’re presenting is very physical! The run will demand a lot of energy, so a lot of focus will go into being on top form for the performance each day.

What’s next for you and how are you feeling about the future in general?

Just after Edinburgh we’ll be going back to France for a season of shows. Then we’re just waiting for our China and Quebec tours to be rescheduled, and to continue performing around the world because it’s what we really love.