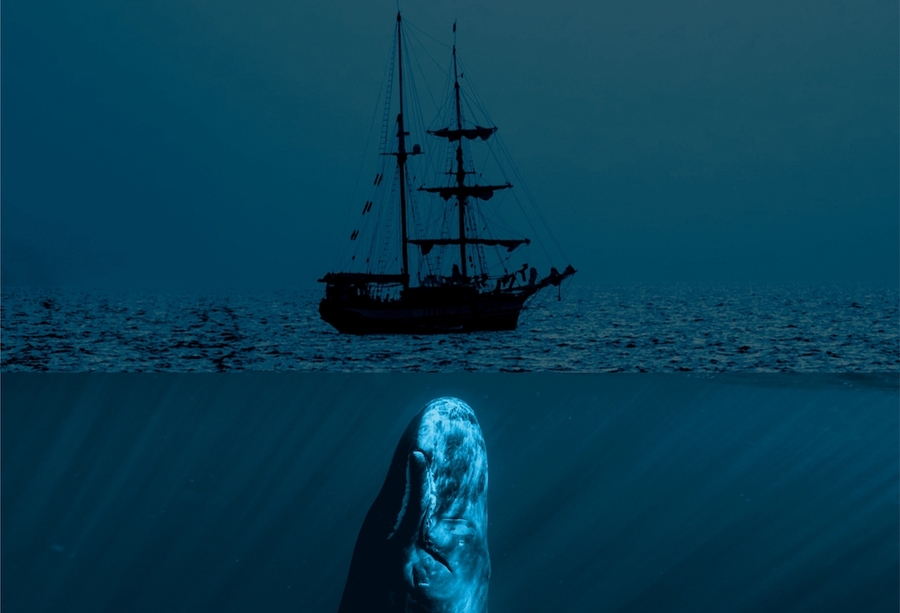 Whale, whale, whale. What have we here? That's right: no less than three Moby Dicks—or should that be Mobies Dick?—inspired by the bicentenery of Herman Melville's birth. If the Fringe programme is always something of a leviathan, that makes it extra leviathanny this year, and reason enough to lower boats and head to all three interpretations of Melville's vast text.

It's a text as vast as the sea, with complex currents, dangerous undertows and whirlpools aplenty. It's also a very literary novel, which does beg the question as to why bother putting it on stage? Grist to the Mill Productions' version (two stars) at Assembly does rather pull this question into focus.

It's clear what the intention is here: a one-man performance in character in Ishmael, there's a striving for a tour-de-force, the scale of the text compressed into magnificent performance. It doesn't really come off, despite an extraordinary line-learning effort from Ross Ericson (who adapts and performs). If nothing else, it makes a good case for Melville's at times pedantic, almost scientific prose remaining a novel of the page not the stage. He trips over his words and, on occasion, loses his place. It's a fault of the text more than the performer.

But the performer has faults, too. There's the accent, which begins as a generic East Coast American, but quickly falters. More fundamentally, though, in compressing Melville's frequently unstable narrative perspective into much clearer reported speech, we lose some of the the enigmatic joy of the text. In particular, by transforming Moby Dick into a wordy first-person adventure story, Ishmael becomes a po-faced reliable storyteller. We're left only with the jokes he tells, not Melville's jokes or insight at his expense. He plays the relationship with Queequeg totally straight – almost exasperated by his affections. Of all the joys of Ishmael and Queequeg's relationship, surely the biggest is that Ishmael fails to understand what his own words tell about feelings that he doesn't understand: "Thus, then, in our hearts’ honeymoon, lay I and Queequeg – a cosy, loving pair."

By contrast, what a surprising, precious little lump of ambergris Leviathan Theatre's production is (four stars). This 10-strong cast of young men perform not just with energy, but with restraint and nuance. Leviathan's publicity material is deliberately vague on whether they are a school group, though they somewhat give the game away when they thank their teacher at the end of the performance for her direction and adaptation of the text. And thank her they should: this is a clear and thoughtful setting of the vast novel. A choice has been made to focus on the dramatic hunt for the whale, but retaining an ethereal dreamlike detachment to the whole affair. That's well done, and clever decisions like moving the five "gams" or ship-to-ship encounters together help keep the tension, each rendezvous feeling like a step closer to damnation.

But there's just enough of the book's sprawling asides to keep this from becoming mere story. What's more, it's handled with confidence, and just the sort of irreverence Melville would, one suspects, have approved of. Here’s an example: the boys speak the chapter numbers in unison, and several of Melville’s (sometimes hilarious) philosophical pontifications are grouped together under a heading of "existential musing". That's funny.

The lads are taut as a harpooner's rope in this very physical, but very sparse performance. They pick up on cues instantly; they move as a single body. A table turned upside down takes us below decks; on its edge it becomes the pulpit from which Father Mapple delivers his manic sermon. There’s some propensity towards hamminess in the portraits of some of the crew, but that's entirely forgivable as an effort to bring out the different registers of Melville's text. Fundamentally, here's a production that takes pleasure in the amibuity of Melville's weird novel.

And then there’s Casey Jay Andrews’ version, The Wild Unfeeling World (three stars), which takes pleasure in not really being about Moby Dick at all. Loosely tied to the text, Andrews instead introduces us to Dylan, her broken down white Renault Clio, Moby, which ran over a now three-legged, now vengeful cat, Ahab. Dylan, in the middle of a set of personal crises, treks across London as Ahab stalks her. We crash into the whale-in-the-Thames episode. We cover concepts such as desire lines and object permanence. No one dies.

The story is told with energy and poetry by Andrews in a tiny (and, to be fair, grossly uncomfortable) living room-type set. Using plastic animals, a torch and self-controlled sound and lighting cues, she creates a mini epic out of small fry. There’s a slight tendency towards the falling cadences and out-of-place spondees of performance poetry which feels distracting, and a couple of tech niggles. But it doesn’t hole the boat.

And yet, in all its sprawling chaos, it is in some ways it’s closer to the spirit of Moby Dick than straight adaptation can ever be. For what is Ahab’s quest other than a personal crisis anchored to the structure of an epic? And in wearing Melville’s clothes, out of chaos Andrews raises her colours clearly – we all fail big sometimes. But in our own epics, someone can come out alive to tell the tale. There’s also a timely shout out to the Samaritans and CALM. At this stressful festival it’s worth remembering: it’s always better to talk to someone than to try and slaughter a whale.