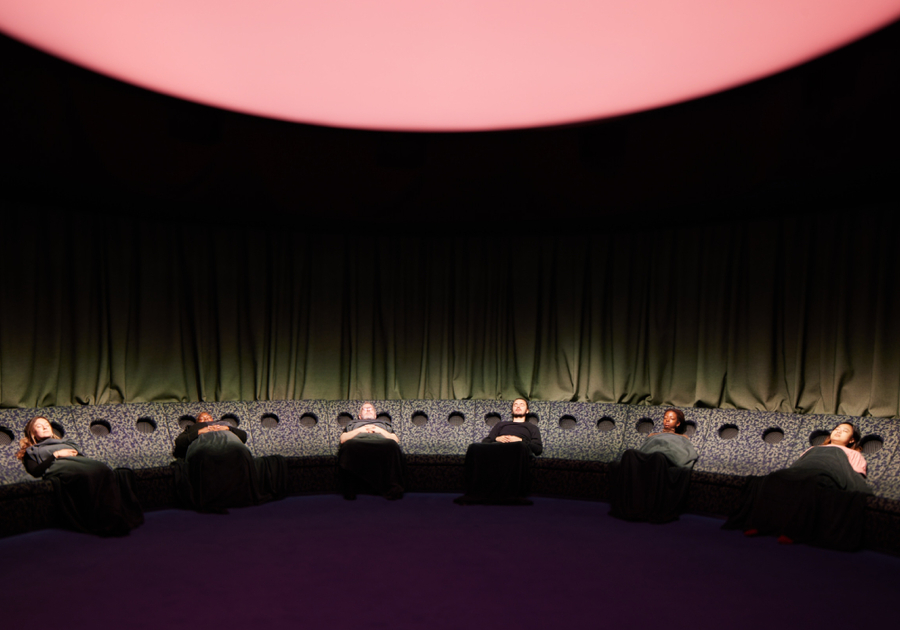 Where’s the strangest place you’ve ever seen a show? In August, it can feel like every single basement, attic and courtyard in Edinburgh has been co-opted into a venue. From the sticky dancefloors of the Cowgate to University lecture halls transformed into comedy clubs, Fringe audiences quickly grow accustomed to spotting rising stars in the most unlikely of places. But look more deeply, and you’ll find that some shows this summer are exactly where they need to be. Which is where we meet the creatives behind three intensely site-specific performances, created in loving response to deeply unusual spaces: a busy secondary school, an amphitheatre made of pianos, and an art deco ice rink – naturally.

Edinburgh theatre company Grid Iron are experts in shaping a performance to fit its surroundings. Or, in playwright and director Ben Harrison’s words, at making theatre that really “listens to a space”.

“You might go in with one idea, but the building will tell you if it works”, he laughs, recalling previous exploits in underground vaults, open-air playgrounds, and the hubbub of Edinburgh Airport. This summer, the target in question is Leith Academy, a large state school near Easter Road. Students will be back in classrooms from mid-August, so the task is to “respect the fact that it’s a working building”, he says, and to tell a story that’s deeply intertwined with its specific setting. “We begin by asking the question we always do – why are the audience here?”

Muster Station is the result. Set 10 years from now, in the moment of an “extinction-level climate change event”, the school has become a processing point for citizens evacuating Edinburgh ahead of a catastrophic flood. The audience will learn the stories of eight different characters as they move through school, all the while awaiting emergency transportation. The multiplicity of voices, perspectives and experiences is central to the play, so much so that each scene has been written by a different playwright: Harrison, Nicola McCartney, Tawona Sitholé and Uma Nada-Rajah. “In a crisis we all need the same things,” Harrison says. “So we want to capture the voice of the city.”

Exchanging a dystopian future for a music-lover’s utopia, the Pianodrome is similarly dedicated to showcasing the sound of Edinburgh. In the historic Old Royal High School, a grand and only recently repurposed building nestled into Calton Hill, you’ll find the city’s most idiosyncratic venue: an amphitheatre crafted out of over 40 disused pianos. “It’s 100% piano!” says musician and producer Matt Wright, “Right down to every single bolt and screw!” Constructed in the round, the Pianodrome is part treehouse, part boutique lounge, and it can hold over 100 audience members within its warm, wooden embrace. 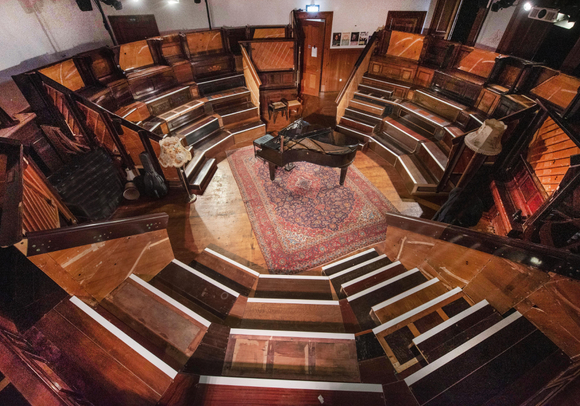 This Fringe, there’s a free lunchtime concert every day at 1pm, as well as the flagship show Pianodrome Live every evening: “The quality is just immense,” enthuses Wright, “it’s a handpicked selection of musicians from Edinburgh and around the world, and it’s different every time: that’s 23 shows and 46 different acts.” Peformances include star harpist Esther Swift, improv with a 140 year old Beckstein grand, and soprano Andrea Baker’s exploration of folk traditions through the lens of Scotland’s colonial history. Wright suggests that you expect the unexpected: “Improvisation runs through everything the Pianodrome does – not just in music, but in life!”

Community-led right down to the on-site food and drink (supplied by homeless charity and no-waste cafe Cyrenians and hyper-local brewery Bellfield) the Pianodrome carves out Fringe space for a celebration of Edinburgh’s year-round creative communities.

In a car park outside Murrayfield Stadium, Dreamachine is conjuring brand new communities. A wildly ambitious project dreamed up by producer Jennifer Crook, the temporary installation twists together scientists, philosophers, technologists, Grammy nominated electronic musician Jon Hopkins and Turner Prize-winning art collective Assemble – all with the goal of giving you a “portal to the powers of your brain”. The original dreamachine is a cult art-object invented by beat artist Brion Gysin in the late ‘50s, and uses flickering light to create extraordinary visions in the viewer’s mind’s eye. “You experience it with your eyes closed!” clarifies Crook, who first became fascinated with the concept as a teen. But it was after attending one of Hopkins’ concerts in 2014 that Crook realised that Gysin’s invention could be expanded and teamed with music – with transformative results. “I just thought, what if it became a whole environment? What would that feel like?”

Crook’s iteration of the Dreamachine will take residency in Cardiff, London, Belfast and Edinburgh, and each time in a public building – a market, a temple or, in our case, a baby blue art deco ice rink. “It’s a new kind of community centre,” she says, “the minute you step inside, you’re in the Dreamachine. But ultimately, the real show is in your head.”

And after the show, Crook enthuses, the community starts: “The minute people connect back to the world, they just want to talk! People are itching to hear what other people have seen.” The experience is free but ticketed, and there’s unlimited time and space for audience members to draw, write and talk together, sharing their innermost visions. “The human mind is one of the biggest mysteries there is,” Crook says, “so what could this experience reveal about people across the world? Do we all see and feel the same things?” Dreamachine makes the case that the most unique venue of all is the one inside of your brain.