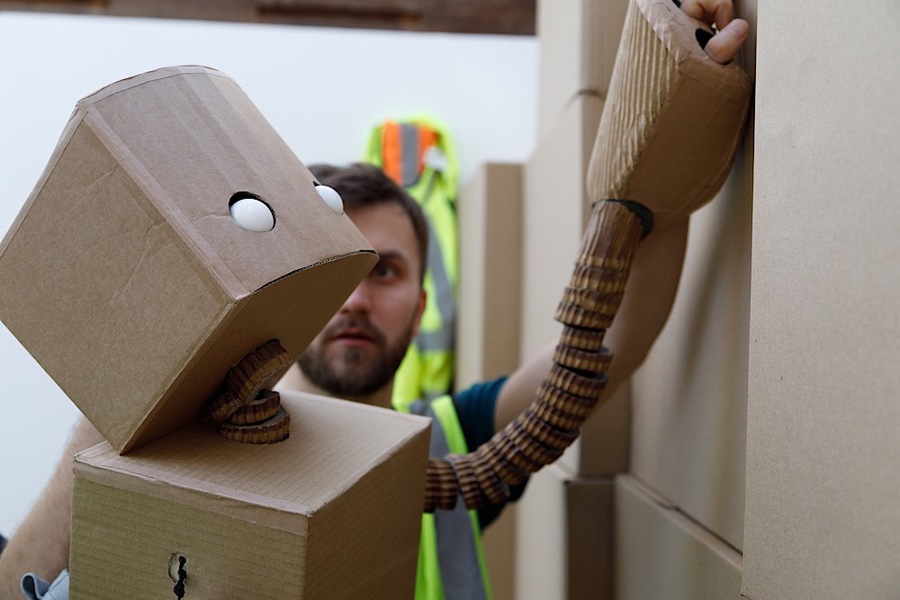 On paper, it’s a neat metaphor: a personal fulfilment robot responds to our every preference and meets our every desire, it’s slick surface hiding the brutal labour practices real people endure in Amazon fulfilment centres. Operated by visible puppeteers, the robot is oblivious to their suffering, too. They are as expendable as the Amazon pickers.

Whether this makes for good theatre, though, is less clear. To start with the good, this production from SharkLegs is rooted in real stories from Amazon workers. It’s beautifully handled. The stories are stark and engaging, and it’s not clear where the line sits between verbatim reportage and dramatic manipulation. The alienation and exhaustion builds to a final fever-pitch expressing the grinding oppressiveness of this exploitative labour. If, somehow, you’re not aware that Amazon operates like this, it’s worth being telt.

But the robot, Robox – it’s just, well, annoying. Quite why it’s played as a neurotic fussbox is never quite clear, other perhaps than to mark a contrast to the usual robotty characterisation as cool and suave. If that arrived in my house at Christmas, it’d be in the bin before the Dr Who special. When the reportage kicks back in, it’s a relief. There’s some nice touches, building audience preferences into the action in real time. But it’s hard to shake the feeling of a disconnect. It’s neither cute and lovable (which might forward the idea that we love our tech too much) nor devilishly smart (potentially: we’re pawns in the game of big data). It also feels like a bit of a cop out. Abusive labour practices exist with and without tech. To blame it on the robot lets the real people off the hook.