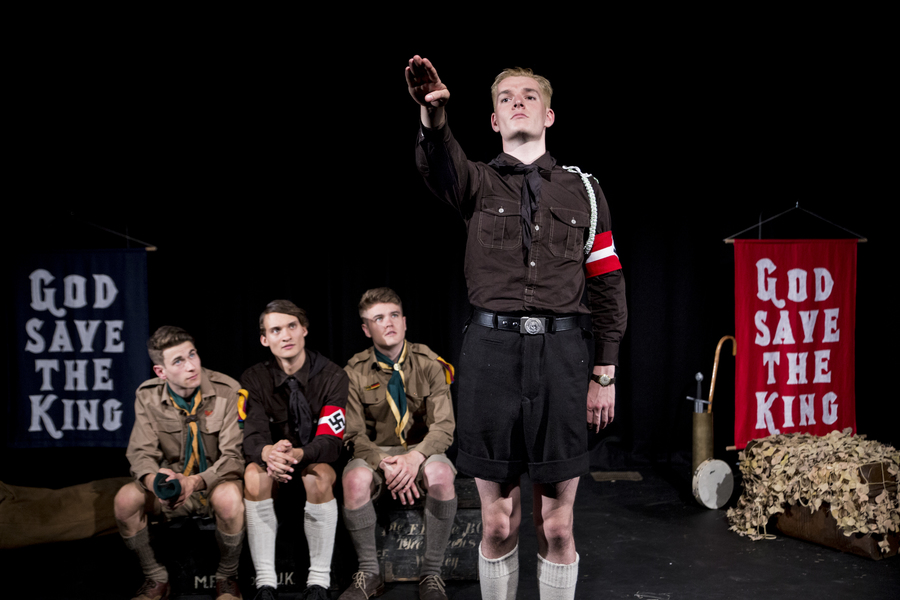 The Good Scout is the curious splicing of second world war history with a gay coming-of-age story concerning the friendship and romantic feelings that form when a group of Hitler Youths come to the UK as guests of The Boy Scouts Association. We're told at the start of the play these exchanges—dubbed "peace and friendship tours"—were a real cultural experiment of the mid-'30s, which the Scouts initiated despite Hitler having outlawed the organisation in Germany, integrating its members into his rather more sinister youth movement.

The meat of the play imagines the few weeks in September 1938 when two of these Hitlerjugend, the fierce Gerhard and timid Friedrich, spend in a sleepy village in Cambridgeshire with best friends and devoted scouts Will and Jacob. Early scenes of horseplay between the lads are almost comically homoerotic, but as The Good Scout progresses it becomes clear writer-director Glenn Chandler regards these adolescent dalliances with tender sincerity.

While these fictional relationships are treated earnestly, the real-life political machinations are framed as pantomime, with the young cast playing the roles of various WWII players, including Chamberlain, Mussolini and Hitler himself. What successfully fuses these disparate strands is the vitality of the young cast, who bound from goofy naturalism in the former plot to high camp in the latter.

The four leads are excellent, but special mention should go to Simon Stache, who's heartbreaking one minute as Friedrich, a reluctant Nazi terrified of going back home, and outrageously flamboyant the next as French premier Édouard Daladier.