What good are the Arts? 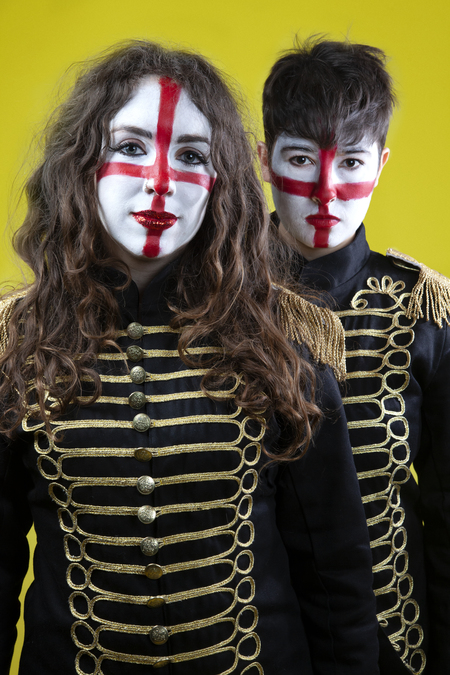 Given everything going on—given climate change, given rising nationalism, given economic decline—could art be part of the problem?

Sh!t Theatre’s new show comes so close to making that case that it all but accuses itself of corruption.

Superficially, it’s a show about what Sh!t Theatre did on their holidays – namely, Drink Rum with Expats (4 stars). Commissioned by an old Maltese mate to create a piece for the Valetta Capital of Culture, Rebecca Biscuit and Louise Mothersole set up shop at The Pub, an English theme bar in the middle of Malta’s capital. Famed for serving Oliver Reed his final round, it’s studded with movie memorabilia and boozy salutary souvenirs. As artists-in-residence, they swapped shots for “expat chat.” Effectively, they got paid to get pissed with local piss artists.

Back at home, on a replica of The Pub, the pair play holiday reps – dishing out drink, imparting basic Maltese ("zobb" / "penis") and leading us in hearty sea shanty singalongs. We toast Reed’s prowess, laugh at ludicrous local customs and slide through their blurry holiday snaps. It’s a hoot and a half – bar the occasional news of another refugee boat capsizing offshore.

Slowly, surely, the show starts to sour, seriousness setting in like a hangover creeping up unseen. As Sh!t Theatre widen their lens, past The Pub to the context beyond, they take in the dingy migrant bar down the coast and its expat crowd and the super-yachts sailing by, the site of the car bomb that killed Maltese journalist Daphne Caruana Galizia two years ago and her ongoing investigation into the illicit passport industry – €650,000 for a Maltese citizenship.

Typically piecemeal and deceptively rambling, Sh!t Theatre’s show spins uncomfortably sharp connections. Without ever hammering their point home, they let us join the dots between the moneyspinning shrine to Oliver Reed, the inconvenient vigils to Caruana Galizia cleared night after night, and the hundreds of refugees whose deaths go unmarked. An essay in escapism and the complicity of looking the other way, a show that seems slight starts to feel seismic.

Barry and Barry block the world out too. In Moot Moot (3 stars), Rosana Cade and Ivor MacAskill’s surreal DJ double act cocoon themselves in noise-cancelling headphones and nonsense. Dressed in matching grey suits, side partings and moustaches, they spin on swivel chairs and turn conversational circles, live on-air. Beneath a jangle of jingles and jaunty theme tunes, they bat chatter between them, broadcasting into the void.

Moot Moot lifts inanity to absurdity. Barry and Barry’s back and forth falls into whirlwinds and infinite loops. Their optimistic pitter-patter eats its own tail and their links—serial killers segue into breakfast cereals—spin connections that slip beyond all sense. Trivial questions trip into existential quandries. It’s all as empty as the static between stations; incessant chatter as a kind of white noise. They keep the conversation flowing whether there’s anything worth saying or not. Imagine Smashey and Nicey stuck in a Samuel Beckett play.

Bit by bit, Moot Moot turns your brain to mulch with its sound effects and singsong voices – as much as anaesthetic as a pneumatic drill. There’s a madness in it that grinds your mind down as often as it lulls you into half listening. That’s a damning cultural critique of a world broadcasting to nobody, always talking never taking calls and generating endless, empty content to hang advertising off. They are the embodiment of greyscale masculinity. But Moot Moot is more a mode of performance than a structured show and, for all you sink into its constant purr, the lack of transformation makes it too easy to tune out.

If theatre can detract and distract, Scottee schools their audience in Class (3 stars). Prowling around in front of a lace net curtain, dressed in a red Adidas tracksuit and gold heart hoop earings, they take a mostly middle-class audience to task. Why have we come to see a working class art? What were we expecting? What did we hope to achieve?

Through tales of their childhood on a Kentish Town council estate, Scottee sets us trap after trap, entwining us in a tight double bind. He talks us through its hardships, and dares us to take pity without being patronising. Joking about its peculiarities, they dare us to laugh along without laughing at. As they twist a truth out of shape, toying with stereotypes and cliché, Scottee dares us to distinguish between the two. It’s an act of working class drag, maybe even minstrelsy, performed by a genuinely working class artist.

That’s slippery, aware class is both performed and projected, but Class ultimately undermines its point by underlining it. A final, fairly crass cry of j’accuse, even if it includes the artist themselves, makes too many assumptions about those of us in the audience, while serving to show Scottee’s presumptions in speaking out on others’ behalves. It’s a shame. For all its quality, Class is self-defeating: a show that exists to show itself up.