The author chats about her remarkable work of journalism and how her book speaks to Adelaide Writers’ Week’s 2020 theme: Being Human 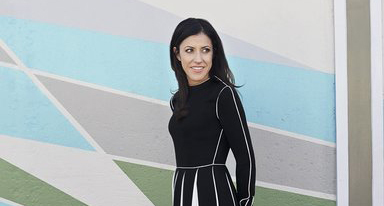 In Guest House for Young Widows: Among the Women of ISIS, author Azadeh Moaveni takes us onto the streets of Syria where many young Muslim women – seemingly Westernised and with university educations – have been entangled in the brutal terrorist regime’s fight.

Your book does a remarkable job of dispelling some of the myths that Western media creates around the rise of the Islamic State. What role does the West have in protecting the vulnerable in respect to the Middle East?

Ideally, the West would simply avoid fueling conflicts in the Middle East by stopping its military interventions and invasions, cutting its export of massive amounts of arms (which militarise societies), and ceasing to actively support corrupt, repressive governments that fail their people. Hands off would go a long, long way, but there are many political and economic forces in the West that actively seek or benefit from perpetual conflict in the region.

The women you report on in Guest House for Young Widows are so relatable, particularly how social media gives them a sense of connection when they are vulnerable or at a young age. What is the role of Facebook in the Islamic State’s recruitment and mobilisation?

The Islamic State and Facebook are a bit inseparable in my mind. Facebook enabled a great many women in conservative societies to become jihadist militants without leaving their living rooms. I would argue that it simply reflected existing pathologies and chaos, it did not create them, and there is only small and partial truth in that.

Your book is a perfect example of how seeing someone’s life through their experience makes their choices seem so much more human and understandable. How important was it for you to tell this story through people rather than through historical reportage?

The story of the women of ISIS couldn’t have been told any other way. They are the most demonised, vilified group of humans on this earth, and only the power of human storytelling could have persuaded anyone to read about or reconsider them.