A promising comedy which falters rather than soars 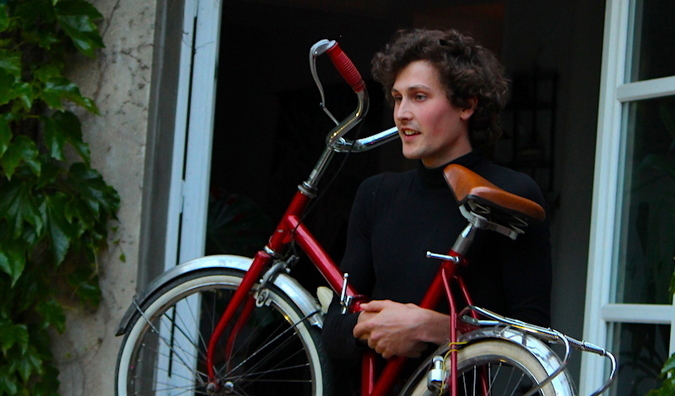 Lucy & Me is a strange love story between a boy – German narrator Sphenn (Nicolas Angelosanto) – and his 1973 red Shwinnster, Lucy. With a whimsical coif and pencil-thin moustache, Angelosanto emits something of a Wes Anderson air and his opening tale of the couple’s morning routine (cereal and milk for him, none for her) promises a quirky and charming show.

As the narrative of their misadventures emerges, including a cancelled visa, an attempt at overnight fame with a naughty tape, and a great escape, things become increasingly bizarre. Angelosanto’s eye for the absurd and awkward physicality carry the show, but unfortunately – despite his Gaulier School training – there is a sense of under-utilised potential in scenes which demand more nuanced physical comedy. There's a lot of comedic possibility lost during a Zumba routine which becomes strained, as too does a mimed scene involving an encounter with the police. Yet, it isn't hard to see that in time this lovely work of nonsense could really soar.