Being a strong, gross, funny, unashamed female is noticeably rare within the circus community. This year, there are two all-female shows smashing these stereotypes 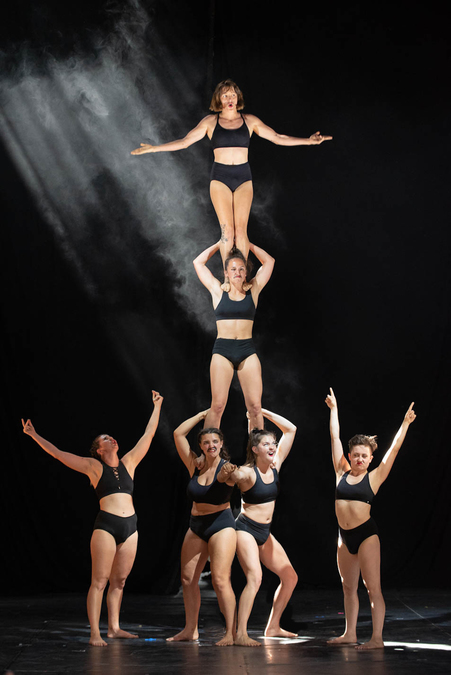 Flick Lannan, company director of Wildhouse Circus and squad member of BOSS SQUAD, found the beginnings of her femme crew at a circus training camp. Lannan and four other girls lined up to learn teeterboard – a predominantly male discipline. “We’d all come up through youth circus, we’d all been told what we could and couldn’t do, and teeterboard was one of those things,” says Lannan. “Teeterboard started it all because there were no girls doing it.” Even though the girls were keen to get into it, it didn’t come easy. “I had to fight really hard to get it and once I got to perform it, it was fine, but it was too much of a struggle for no reason.”

YUCK Circus, created by Georgia Deguara, began as a series of gross stories from Deguara’s own experiences and those of the people around her. “It was just going to be kinda gross stories but bringing it back in like, ‘Well, that’s life, and sorry you had to hear that’,” says Deguara. “One time I absolutely exploded a bathroom stall with my period by accident, and had to deal with it really quickly.” Attempting to bridge the gender divide by relishing in our ability to embarrass ourselves in the most disgusting of ways, YUCK Circus keep their tongues firmly in cheek while exploring social issues including binge-drinking, sexting and menstruation. “A lot of people assume we just talk about periods,” says Deguara, “but we talk about binge drinking and prejudice within contemporary and community circus and there’s a whole aspect there.”

YUCK Circus’ genesis wasn’t gender specific, but with an all female crew, Deguara saw the opportunity to create political statements within the gender discourse. “When it became a full seven-person cast and it turned out that everyone was a lady, it ended up being a very gender politics lens,” she says. “I thought it was going to be a bit of a cop out, but by the time the show was written, and we were in the space making it, it was just easy to talk about and so it is what it is.”

Both BOSS SQUAD and YUCK Circus use personal storytelling in a circus genre-bending way. Lannan has a large speaking role within BOSS SQUAD which allows her to break away from gendered assumptions. In one story, she discusses her choice and desire to never have children. “I would rarely tell those stories at a party, but I’ll tell this group of strangers this random story and maybe they’ll have the courage to give a rebuttal the next time someone says to them ‘when are you having a kid?’”

There is a strong aim in both shows to use storytelling to shift audience perceptions, while having a good time. “What surprises me is how much of a difference we make in people’s lives,” says Deguara. “We’ve had people leave our show bawling because it’s just so true to them and relevant and they’ve never seen it out loud before.” There have also been strong male responses, from those who thought they were doing a good job of being feminists. “We’ve had fellas come up and be like, 'I can see there’s room for improvement between me and my mates,’” tells Deguara. “It sucks that it hits so hard. I think it’s quite tragic that what we’re saying is relevant.”

Lannan, however, has her sights set on the teenage girls who are looking to be represented and validated for their choices. “We made this show as a love letter to ourselves,” she says. “If any other 15-year-old girl who is trying to do something comes to see the show, they see ‘I can have big arms’, or ‘I don’t have to worry about my wobbly thighs because it will let me do this amazing thing’ and that’s the goal. We want to get the 15-year-olds in and make them feel better. Make it easier for them.”

Breaking the delicate femme mould is a consistent theme in both works. Although delicate females are worthy of celebration, their over-exposure in society makes for harming expectations. “We were brought together by circus and generally you get told what to do based on your body,” says Lannan. “We had lots of body issues during our teenage years and still do, although not to the same extent. But we still have self-consciousness about going to the gym, or being as big as we are, or as strong as we are.” Deguara faced similar body issues in her circus training. “I wanted to explain the pressures of trying to be a female circus performer,” she says. “To be a certain body shape and type and to do certain specialties, or look a certain way, or act a certain way. It was hard to be funny, and it was hard to get your comedy taken seriously, or your style taken seriously, if you weren’t matching it with high skills or glitter.”

Representation and diversity of representation is incredibly important, in any context. By highlighting circus disciplines which often spotlight males, and celebrating strong, quick-witted women, both BOSS SQUAD and YUCK Circus are allowing young females to see a world where they are no longer pigeonholed by others.