After five years of touring across Japan, the US, China and the UK, Erth’s Dinosaur Zoo is returning with updated science and some new locals 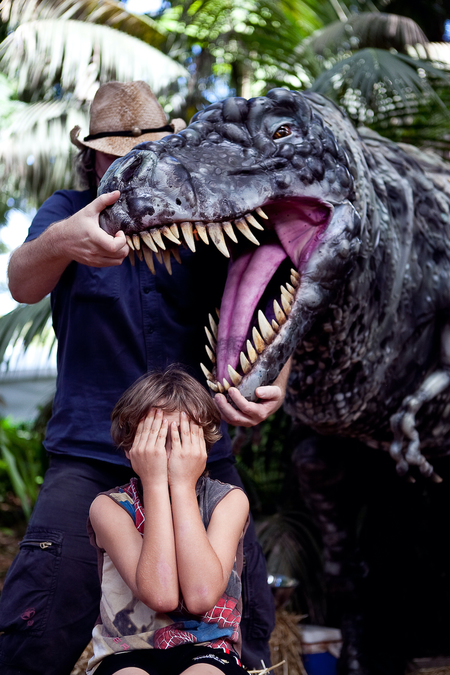 Take Steve Irwin's charm, add some talented puppeteers with a dose of paleontology and you've got a reckless petting zoo filled with animals from our distant past.

"The show is a wildlife presentation with dinosaurs – we just present dinosaurs as live animals," says artistic director Steve Wright. Based around paleontology and true science, Erth's Dinosaur Zoo is anything but a bore. "The thing I love is that it's quite reckless," Wright says. "When you're taking some of the most dangerous creatures that have ever existed on the planet and letting kids get close and personal with them, it's like letting a child stick their head in the mouth of a lion."

After years of touring and learning new information through progressions in paleontology, the crew has expanded. "We've got two new dinosaurs, the Minmi paravertebra and the Fukuiraptor," he says. The Minmi is most likely of the Ankylosaurus family – "it looks like a little ankylosaur, but it doesn't have a club on its tail," says Wright. "The Fukuiraptor comes from Japan, but is closely related to the Australovenator."

Wright strives to teach audiences about the creatures that existed in our own backyards. "People don't realise that dinosaurs are specific to different land masses," he says. "We were able to create a T-Rex and Triceratops for the US, and we get to highlight Australian dinosaurs now we're back."

Engaging with kids on a scientific level isn't always easy, but remembering where you have come from is a key part of Wright's success. "I used to be a young person so I think I can speak with authority. We don't soften the edges. A lot of the material is science based, but it's really important that we don't dumb anything down and we treat children as equals," he says. "It's difficult with paleontology because it's a malleable science and is based on creatures which lived more than 65 million years ago – every day theories and hypotheses change based on new information."

Wright also had the opportunity to discuss conflicting hypotheses with a budding young scientist. After noticing a particular child had attended multiple performances at Melbourne Zoo, Wright invited the boy backstage to chat all things prehistoric. "He wanted to tell me that he had his own theories which were religious based," Wright says. "We had this conversation around theories and even though he doesn't agree with my theories and I don't necessarily agree with his, we could both agree that we can have our own."