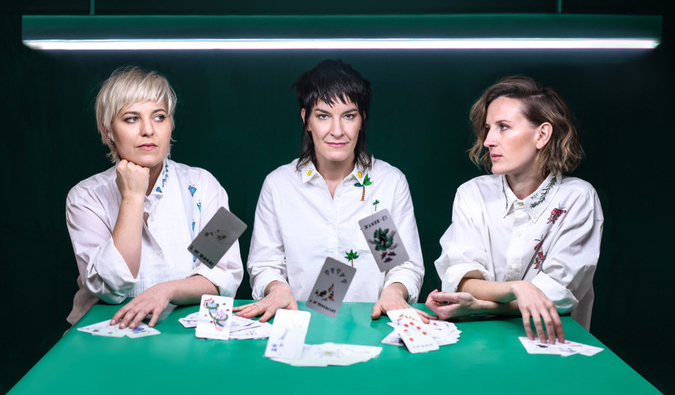 Years before WOMADelaide began, a little Jen Cloher would scurry out of her house, across Hackney Road and into the parklands of Botanic Park to play beneath the Moreton Bay fig trees. "I’d cross that road, you know, and I’d be in nature – to some extent. So weirdly, I’m kind of going back to my old stomping ground."

Cloher went on to spend her adolescent years along Henley Beach’s coastline, trekking into the city to bask in the grime of Adelaide’s grunge rock scene. In their track 'Falling Clouds', Cloher reminisces about seeing The Clouds and Falling Joys as a teen in Adelaide. "You kicked the door wide open so I could walk onto that stage."

Dyson Stringer Cloher are now embarking on imparting the same inspiration Cloher found in Adelaide’s underground music scene to thousands at WOMADelaide in 2020.

It’s sublimely cyclical to have Cloher return to Botanic Park with Mia Dyson and Liz Stringer, who make up the trio. A group that enlivened a new wave of female and gender non-conforming artists.

The three formed Dyson Stringer Cloher on a whim in 2013. They played 40 gigs across the country, leaving people aching for more of their music, before diverging down the different paths of their individual careers.

Six solo albums later, a stack of trophies, and some seriously inked-up passports, Dyson Stringer Cloher have released their self-titled debut album. And it is a jewel. It’s rock with sensitivity, simplicity and a natural fierceness.

The three pioneers aren’t doing this the old fashioned rock’n’roll way, but with an enviable zen swagger. "None of us drink," Cloher says. "We just like sipping our kombucha and dandelion tea." And as far as in-house fighting goes, it’s pretty tame. "Probably the biggest argument we would have is what milk we would put in our coffee. It’s actually quite embarrassing. Quality problems though."

There’s no denying Adelaide’s impact on Cloher’s formative years. From Carclew to Flinders Drama Centre and the Adelaide Fringe, her trajectory as an artist began on these streets. It’s something she hasn’t forgotten. "I love Adelaide. And the thing I really love about it is that it’s not a big bustling city. Particularly as an artist growing up, there’s enough of a sense of that isolation and loneliness you need as an artist to sort of really have that time on your own to imagine and create."