The Ensembles of WOMADelaide

A talk with four of WOMADelaide’s (literally) biggest bands 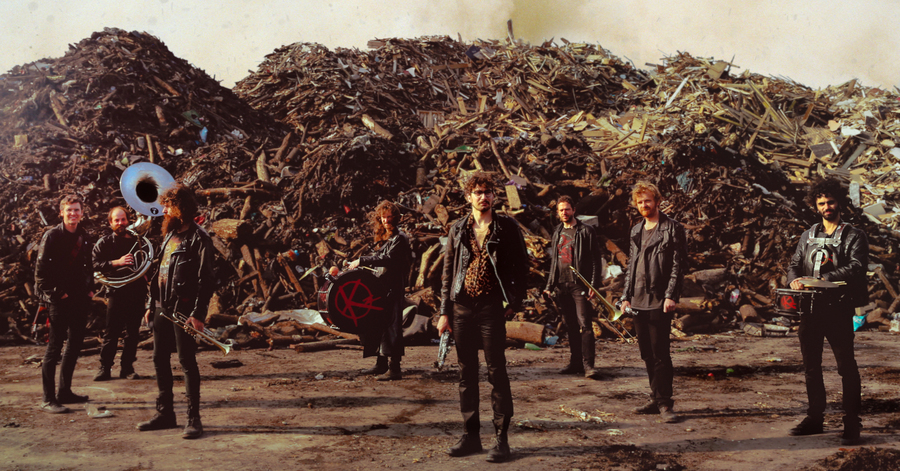 A curious act, the octet have refined their musical identity over more than a decade of Belgian street festivals. "We started with traditional Balkan music, which is wonderful, because it has beautiful melodies and interesting rhythms, and we feel free to play them a different way," says Maxime 'the Megaphonist' Tirtiaux. "Then we added more rock sounds, and some very weird sounds coming from vintage electro and our street acts.

"Now we have reached this very original fusion between Balkan, electro, jazz, and metal – but I think that’s just a result of our curiosity for different kinds of music," he says, who plays two kinds of mandolin (the banjolin and tamboura). "As musicians, everyone’s playing jazz, and rock, and many different styles. And with this band, we have a very clear goal of making very energetic music, full of the desire to party.

"Playing centimetres from the public, there is a lot of interaction and improvisation. I think we learn a lot from these experiences. We love playing street concerts, and amplifying our music with the huge metallic dinosaur that we’ve made. It looks amazing, it looks very crazy. And it’s even more crazy to play very loud acoustic metal as a brass band," says Tirtiaux.

"Because we make this hybrid genre of music, we don’t really fit with many festivals. Rockers, I think, cannot conceive of a rock band without guitars, and with horns instead of amps; for traditional music, it’s too loud! So we find ourselves in very independent and very alternative networks, like WOMADelaide."

Long before they started playing together, Dr Piffle & the Burlap Band were friends through skating and surfing around Adelaide. Like KermesZ à l'Est, their style came about through a combination of talent and improvisation. "Originally I played bass, but I went overseas and they picked up another bass player, because it’s kind of an essential instrument," says Nick Dugmore. "So when I came back, I just started playing a piece of driftwood that was in the back of the ute. Then my mate came back from Canada with a trumpet he found in a second-hand shop, and I used to play trumpet in the school orchestra. So I picked that up again too.

"I’m really looking forward to just hanging out with the band, having everybody back together," he says. "It’s pretty rare that we’re all together, even for a rehearsal. We’ll squeeze a few in before a big show like WOMADelaide, but one of us lives in Melbourne now, one in Sydney, and everybody’s got kids."

Dr Piffle & the Burlap Band have been on a break since 2015, when multi-instrumentalist Jed Altschwager (accordion, vocals, tambourine, and didgeridoo) lost his lower right leg in a workplace accident. Reuniting for WOMADelaide might offer them more than one reason to celebrate. The morning of their performance, Altschwager will find out if he’ll be rowing for Australia in the Tokyo Paralympics. "If he makes the Paralympics, it’s going to be a huge celebration for us – it’ll be an incredible day and night," says Dugmore. "If he makes it, we’ll take the band to Japan later in the year, to watch him and play together."

In the meantime, ten Tokyo locals will visit Adelaide as the Minyo Crusaders, whose music draws on the soft nostalgia of traditional Japanese folk songs, min'yō. Their songs emerge from extended jam sessions, where the band’s nine other members improvise (on guitar, bass, keyboards, trumpet, saxophone, timbales, congas, bongos, and melodica) around the vocals of founder Freddie Tsukamoto.

"We play danceable party music, but it comes from Japanese folk songs that have been sung for more than 100 years," says Crusaders co-founder Katsumi Tanaka. "The ideas for the backing tracks come from various world music genres. Each member brings different world music rhythms and riffs, playing along with Freddie’s singing."

Their crusade to revive min'yō has taken them across the globe, with the band recently completing their first tour of Europe – including a performance at Dutch festival Le Guess Who? on the same night as fellow folk vocalists (and WOMADelaide 2020 visitors) Aldous Harding and Ustad Nasseeruddin Saami.

Tanaka says that travelling together has helped the Crusaders to bond. "The feeling of increasing teamwork is a very unique experience, spending time with members of various ages and different living environments (in Japan). "And of course, the most enjoyable things are the delicious local foods of the places we visit."

Born out of bands like Musiki Manjaro, LABJACD, Alárìíyá, and The Bombay Royale, as well as the wider Melbourne musical community, the group have been together for 12 years with few changes to their epic lineup. The Afro Orchestra describe themselves as “a 21st century response to afrobeat,” incorporating elements from hip-hop as well as a host of pan-African rhythms.

"[Afrobeat pioneer] Fela Kuti said music is the weapon of the future, and that is an edict that we hold close to our hearts," says trumpeter Tristan Ludowyk. "Our music is aimed at the dancers, but we always want to bring everyone together and make them think a little as well. We party with a consciousness."

For all 19 members to write together, each song has to come from a different ‘seed’ – a theme from which they can all take musical and creative inspiration. From that seed, the guitarists, percussionists, and six-piece horn section will improvise slow, simmering grooves. These will become the skeleton of the song, around which the band’s vocalists will bring its message to life.

"A Public Opinion song will always take you on a musical journey," Ludowyk says. "One of the great things about our band is that we have members from all corners of the globe, with different interpretations of not only the music we play but the message we bring to our fans too."

It helps that they enjoy each other’s company, as well as sharing in their musical passions. "Once we add soundies, partners and children, we often have a party of 30+ travelling together. And that’s what it is – a party!"

A decade after they last played WOMADelaide in 2010, the Afro Orchestra are "excited beyond belief" to be returning. "It’s always a great time whether performing or not," says Ludowyk. "It’s one of the best curated and run festivals in the country, and they treat all their artists really well and make them feel right at home. And the diversity of music and experiences on offer are incredible – almost all the performers are masters of their chosen craft.

"But the thing about WOMADelaide is that you always find your favourite performances come from acts you’ve never heard of before. There are just so many new things to explore and check out!"