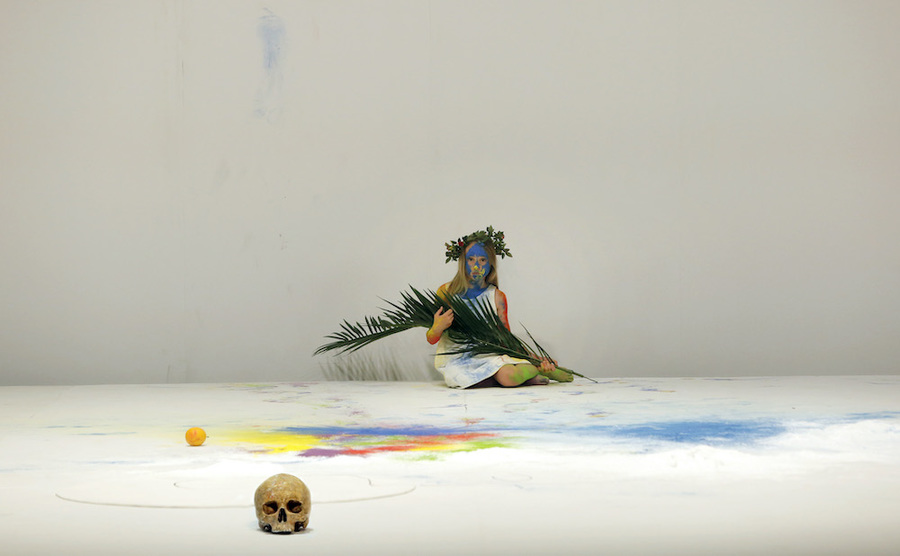 Rich colour, thought-provoking images, and virtuosic choristry are all on display for Requiem. And like a requiem mass, it displays many touching reminders of life's wonders, and of its fragility. As a theatrical reimagining of Mozart's 'Requiem Mass in D minor', the show toys with the idea of extinction – reminding us of lost landmarks and species.

Requiem's soprano Siobhan Stagg sets the scene on the casts first day together, when the director Romeo Castellucci, "pointed out... that while we call any requiem a 'mass for the dead', it's of course intended for the living — those who are left behind — as a source of solace and comfort through their pain."

For Stagg, Requiem as something of a rebirth too: "The pseudo-narrative of this performance follows the life of a woman in reverse. The opening scene shows her completing her evening ritual of watching TV before bed, accompanied by off-stage voices singing a Gregorian chant. The character morphs into a younger woman, then a child facing the challenges of individuation, and finally, we see a young baby on stage.

"There are multiple layers around this basic throughline in the show, how you will interpret it will depend on your own story. This is a show that sticks with you, unraveling in your mind in the days and weeks after the performance."

Stagg is excited to be in front of an Australian audience, after studying hard at university in Aix-en-Provence in southern France. "This Requiem is an opportunity to meld these worlds together, performing what is traditionally a concert piece, in an operatically dramatic context. I'm sure the piece will evolve even further in this new context and situation."

Shrouded in mystery, the myth of the orignal work is that a stranger appeared before Mozart to request the writing of a requiem mass without revealing who it is for. Mozart superstitiously believed it is for himself, throwing himself into its creation. Taken ill during its frenzied production, he dies before it can be finished.

Despite the bleak undertone of this history, Stagg insists their modern day performance is one of optimism. "Overall the piece is intended to be uplifting, and to stir feelings deep within us. It's not always joyful, but brings meaningful contrasts between the ideas of darkness and light, hope and despair, life… and our inevitable death. The final image is full of hope."

2020 marks 250 years since the birth of Ludwig van Beethoven. The Sound of History brings Beethoven, Napoleon and The Revolution together through the Adelaide Symphony Orchestra, led by acclaimed composer Brett Dean.

Broken down into three parts, the performance is focused around the Heiligenstadt Testament, a letter from Beethoven that was kept a secret until his death.

"I have been fascinated by this document ever since I first saw a facsimile of it and grasped the powerful personal nature of its message," says Dean. "It inspired me to write my piece Testament in 2003. It's an attempt to capture something of this emotion and story in sound, and will be performed in this concert."

The Heiligenstadt Testament is referred to as a last will. It offers insight into a troubled young man struggling with depression and on the brink of suicide. "Beethoven wrote the Heiligenstadt Testament both as a last will and testament and as an emotional cry of desperation about his worsening deafness," says Dean. "It's a very moving essay about creativity and overcoming the most profound of setbacks."

What is revealed in the letter is far from how we usually think of the virtuoso's reputation, who at the time was creating his masterpiece Eroica.

Dean's longstanding friend Sir Christopher Clark performs a talk around the Testament within the show. For Dean, going on this journey together is a personal highlight. "Sir Christopher shows in his talk how music can not only stand as an expression of times in history, it can itself be history-making as well."

Considered Beethoven's most profound piece of work, Eroica is the third piece in the performance. It was dedicated to Napoleon upon its completion. As Dean tells us: "In his talk, Sir Christopher illuminates in very gripping detail the highly volatile time of the Napoleonic wars and how hero can turn to villain very quickly. It's also fascinating to see how this touched on Beethoven's own life and work."

Cold Blood is something else entirely: a show about 'seven stupid deaths', performed on a tiny stage using hands as the performers. Projected onto a large-scale screen, the idea is a double-vision approach made directly in front of an audience.

In a sense it's more comedic than dramatic, the notion of death here is a lighthearted segue to thinking about our lives. Filmmaker and creator Jaco van Dormael wished to use death to purvey the moments we have before we die. Moments which in turn make us think of our sweeter moments in life.

"It's less about death," says van Dormael, "than the life before the death. At the moment of the death when you think 'OK!'"

He adds: "People think that they will see all of their life passing before their eyes and in fact it doesn't happen. What you remember from life is not something glorious, it's not success or a story, its more the very tiny little things. You remember a smell, you remember the softness of a skin, you remember the taste of a fruit, and it's all about these very little things that are perhaps the most important."

Working closely with choreographer Michèle Anne De Mey, the two wished to create a performance that would allow them to finally work together as a pair. "It is something we invented nearly as a joke," laughs van Dormael. "Dancing with hands has very little choreography. But Michèle Anne says that you can see the whole movement of a body in the hands. The hands are something special because they are the only part of us which we see all the time. For the rest we need mirrors.

"We very quickly discovered that the hands are very expressive and of course you can imagine that the hand is a body, that the hand is an animal and that it is also a hand. But all these transformations are very interesting and here the experience with the audience is quite naturalistic. We had an opportunity where we could make something new and it was a challenge that we gave to ourselves," he says.

"I think everybody in the audience is creating his own vision, his own experience."