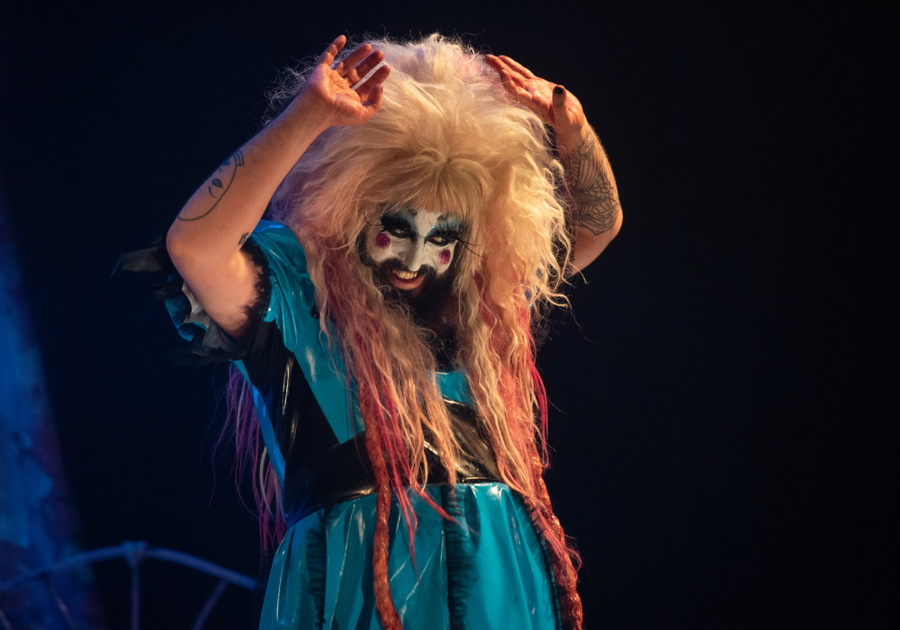 The concept of the Final Girl is a common trope used in slasher films. She’s the last woman left alive to come face to face with the killer and often the force that restores good; the one continuing on the story. It’s fair to assume that you’d root for this person, wanting her to succeed in outsmarting the villain. The latter applies unequivocally to Baby Lame, whose debut solo show Final Baby Girl! is a maniacal romp through their ultimate fantasy of, at long last, assuming that Final Girl role.

The cult cabaret star’s frenzied persona is punctuated well with the videos screened behind them, ranging from a wacky cartoon about their early life to screenshots of matches from a horror-centred alternative to Tinder or Grindr. Along the way, they never forget about the audience, who quickly become unwilling participants in their strange narrative about erotic vampires and mass-murders. In most cases, such forced audience participation can be hit or miss but Baby Lame’s brand of absurdity is hard to resist, with everyone on their feet (or lying on the floor in some cases), cheering them on in pantomime-style call and response.

In this riotous hour full of original songs and slasher film cliches, Baby Lame combines punk-horror and innovative theatre-making to playfully interrogate the trope of the Final Girl. They're not fearful or intimidated by this anonymous knife-wielding killer; they're badass, gutsy and kind of kinky too.