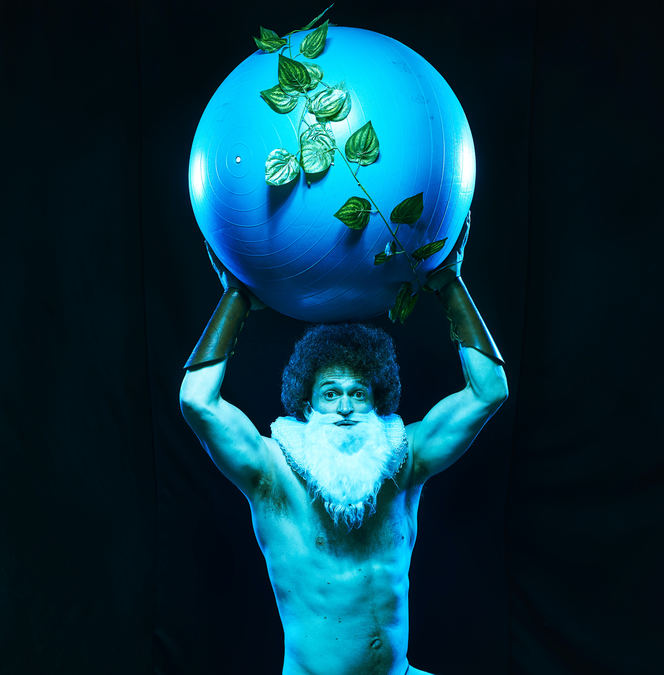 Somewhere between the Battle of Troy being retold through the medium of German Expressionism, and the spectacle of a semi-nude Narcissus crawling across the audience to gawp at his reflection, it occurs to you that Greece Lightning is not your average classics lesson. Taking us on this deliriously funny tour of Greek mythology is Garry Starr, the alter-ego of Australian comedian Damien Warren-Smith.

The premise of Greece Lightning, explains Starr at the outset, is to save “Greek” from decades of “ergonomic procession” by encouraging us all to go there on our holidays and spend loads of “gyros”. Really though, it’s an inspired showcase for Starr’s adroit clowning and gonzo comic sensibility.

Bounding on stage as Mount Olympus head honcho Zeus, complete with lightning bolts dangling from his nipples and an incongruous Elizabethan ruff around his neck, Starr works his way through all of your favourite Greek deities, Titans and side players. This one-man whirlwind is supported by a game audience, whose Herculean tasks include battling a Cyclops and taking on an adorable Cerberus whose three heads bear a striking resemblance to Sooty’s canine BFF – although their biggest challenge of the night is knowing where to look when Atlas’s tiny loin cloth goes awry.

If you don’t know your Athena from your Uranus, don’t worry. Working knowledge of Greek Myth isn’t required to appreciate the sublime craft of Starr’s physical performance and his complete command of the audience. The results are a quintessential Fringe experience where it feels like anything and everything could happen.