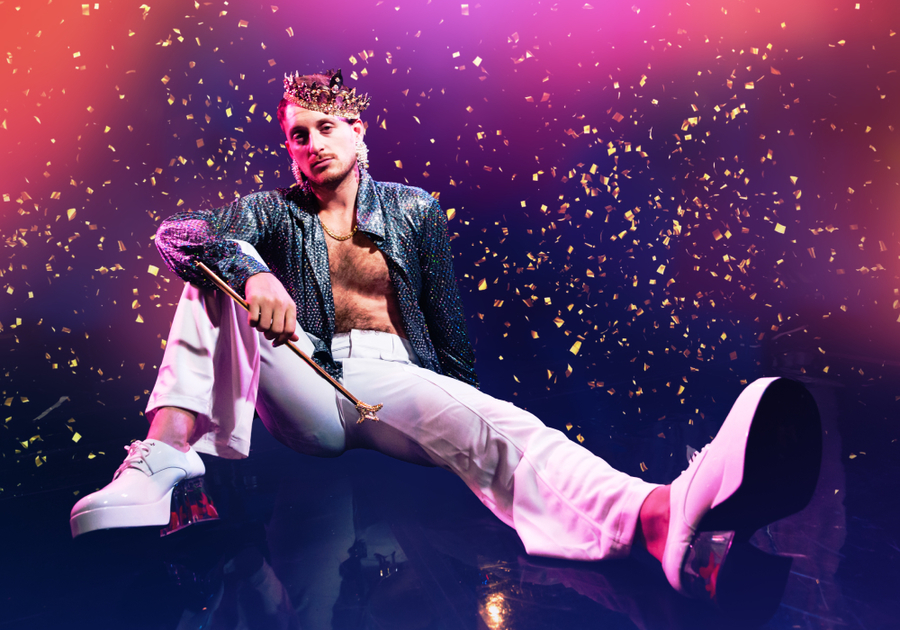 Spending an hour with a Philppe Gaulier-trained clown, you might be able to predict what you’ll get – self-deprecating playfulness, perhaps some exaggerated physicality and light bombast. What you may not anticipate is material that delves deeper into the more intimate and personal aspects of being; going beyond surface-level to uncover something that isn’t just all slapstick gags and laughs-aplenty.

The premise of Spectacular Industry Showcase is simple: this is Zach Zucker’s last ditch attempt to make it in Hollywood, the audience becoming industry bigwigs that he has to impress (or physically replace if they make the mistake of leaving their seat long enough). His sparkling unbuttoned, Saturday Night Fever-esque shirt provides an indication of his commitment to the cause, accentuated by the hurricane of anarchic energy that he brings along with him.

Spectacular Industry Showcase draws on some of the strengths found in Zucker’s previous shows, including the gloriously silly, physical comedy of Zach and Viggo and the eccentricities of his notoriously crappy alter-ego Jack Tucker. The difference, however, is the feeling of growth present, with Zucker allowing vulnerabilities to take centre-stage, whether he’s going off on tangents and riffing with the audience or quite sincerely singing about being a longtime wanderer.

This isn’t merely an hour of absurdist chaos – though those elements are present and correct from the get go (see characters Antonio Balonio and rapper Lil Penis Johnson). Subtle live scoring in the show comes courtesy of Lucas Tamaren, the frontman of LA-based funk band Thumpasaurus, with director Jonny Woolley controlling the soundboard with excellent comic timing, in trademark Stamptown fashion. Ultimately, this is a production with surprising heart, leaning on genuine pathos while still keeping the overall mission statement of nonsensicality firmly in mind.