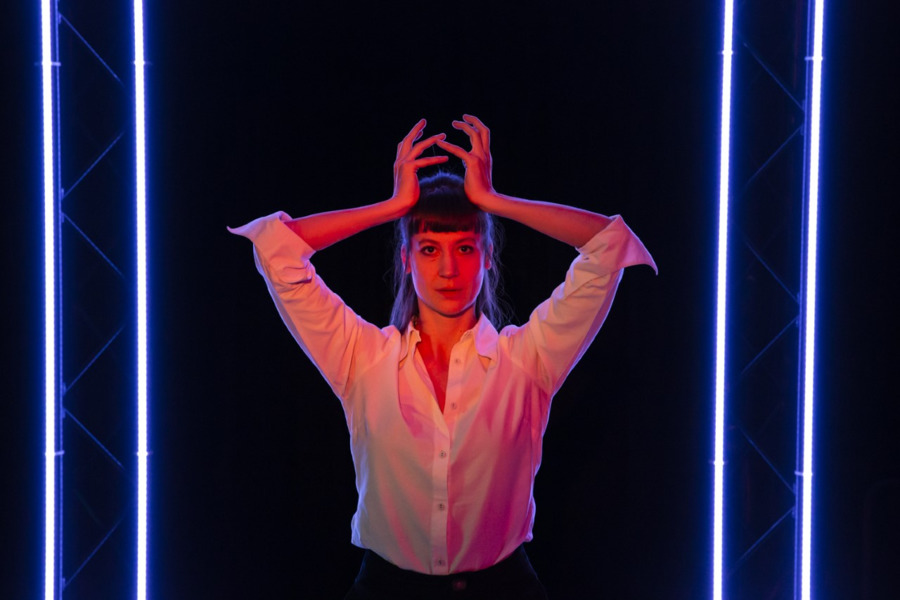 At the centre of Sophocles’ ancient Greek tragedy, Antigone is a defiant woman who resists male, as well as state, power and dies upholding her principles. For Scottish Dance Theatre’s condensed, modernised retelling, the focus pulls in on that wilful resistance and the power of dissent.

It’s experimental dance theatre with an intimate audience in the round and Solène Weinachter puts in an astonishing solo performance. Shapeshifting from howling dog to echoing Greek chorus, via the merciless King of Thebes and herself as a modern day performer in the Fringe, Weinachter’s range of movements is electrifying. From a round of applause with her feet while she’s in a handstand, to febrile, full body spasms or clunky Ray Harryhausen-style stop motion jerks and a cinematic backwards run as if someone’s rewinding a video, Joan Clevillé’s dizzying choreography and Weinachter’s intense physicality is a dazzling combination.

Overall, it’s a high concept work with dense layers of spoken text, dance and music accompanying some storyline tweaks on an already complex plot. It’s a lot to digest in just over an hour but several eccentric, maniacal and often funny moments lighten the more impenetrable moments. Blasts of ‘Zorba the Greek’ and a song from Mary Poppins are a highlight and the parallels with contemporary modes of resistance – hunger strikes, political protest, song, sex, silence, kneeling down or simply living in queer, disabled bodies – pack extra power when they are dropped in towards the end.