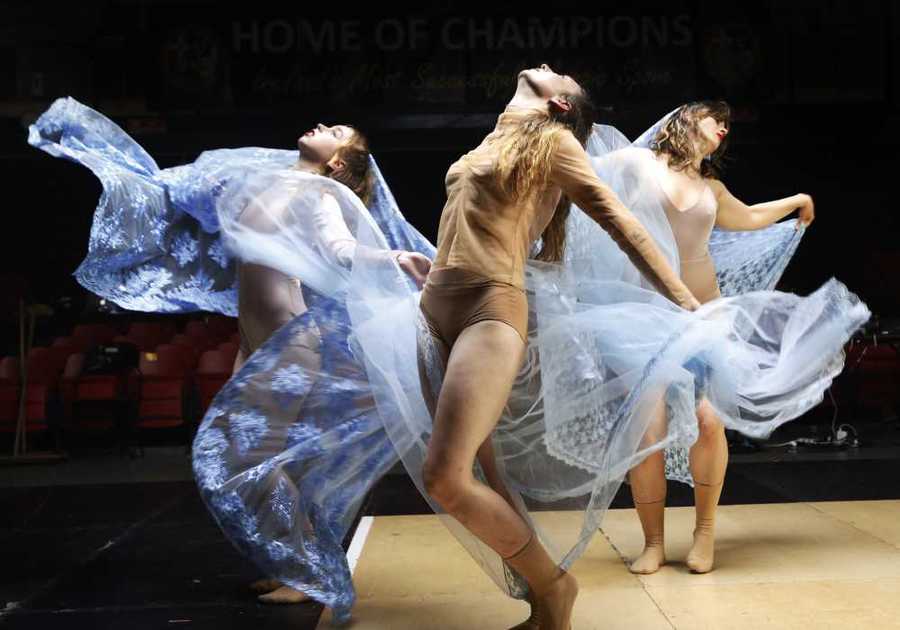 A man in blue tracksuit bottoms paces menacingly as the audience stream into the venue. This is how United Fall’s Night Dances begins; with one solo body twisting and convulsing against the backdrop of droning organ-like sounds.

Under the dim glow of Stephen Dodd’s giant circular light, which hangs in the air like the beam of an alien spaceship, the first dancer is replaced by a young girl in red gym shorts, who is then eventually joined by her troupe of four other dancers. They're all perfectly in sync as they twerk, cartwheel and pirouette like cheerleaders on overdrive.

The contrast between these young dancers and the noisy industrial techno, played by the three musicians at the back is stark, but effectively epitomises the crux of choreographer Emma Martin’s piece. Despite the visual differences, the dancefloor connects all performers and provides anyone and everyone the opportunity to be free, get sweaty and feel something.

The next soloist, whose silhouette gradually becomes more frenzied as if controlled by the fizzing synth, is hypnotising, the strobing lights making you momentarily forget where you are. When the final trio of dancers enter, we’re all in on this trippy night out. Their bodies match the pulse of the beat and they dance in almost tribal fashion, like witches around a spell circle.

A joyous and utterly captivating piece, Night Dances makes you feel like you’ve taken ecstasy and you’re collectively coming up with everyone on stage and in the audience.