Interviews: Hip-hop at the Fringe

Comedian Chris Turner, JooWan Kim of Ensemble Mik Nawooj and Caste-ing writer Nicole Acquah speak about the use of hip-hop and rap in their Fringe shows this year 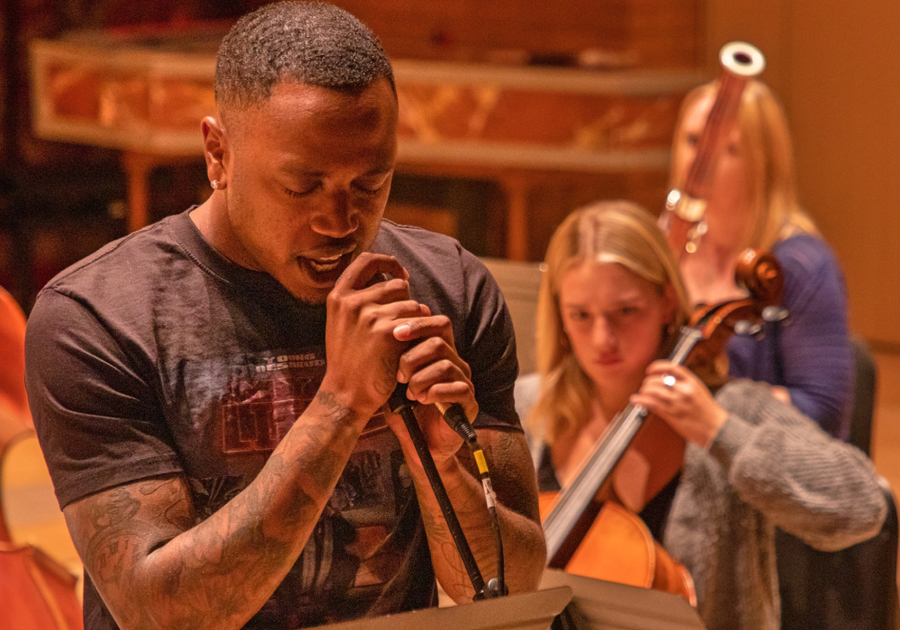 As an art-form that was first birthed in New York City in the 1970s, hip-hop has evolved, progressed and morphed as it's travelled the world. Since its inception, the genre has soundtracked vital cultural moments and been used as a means of poetic expression, art and protest by predominantly marginalised voices. Though it has taken decades for hip-hop to be accepted and respected as a crucial art-form by wider cultural institutions, increasing cross-genre collaborations and its inclusion in academic frameworks have allowed it to pierce through the veil of what is considered as 'serious art'.

With the Fringe being an annual hot-bed for experimentation and innovation, hip-hop has increasingly found its place in the programme, but beyond the music section. We speak to three artists who incorporate hip-hop and rap into their shows this year in unique and significant ways.

...On how Ensemble Mik Nawooj came to be

As a student, I wrote a protest piece against the so-called new music aesthetic. It involved introducing hip-hop into classical music. There was a huge backlash from the teachers, which I fully expected and revelled in. However, it also got an enthusiastic response from the audience and the press. Afterwards, our resident MC at the time suggested that we make an album and I wrote an hour of music – but I had no idea what it was. The rest was me actually getting into hip-hop and having a conversion moment via N.W.A and Dr. Dre, then building a new kind of concert music that had both the principles of hip-hop and classical.

...On the primary thinking behind The Hip-Hop Orchestra Experience and working young musicians from the Royal Conservatoire of Scotland

The Hip-Hop Orchestra Experience is a culmination of what we have been doing for some years. The idea is to do shows around the world that reflect regional pathos, and which feature local performers. The Edinburgh Fringe will be the first. This idea lends itself to working with high level local musicians, which naturally led to the Royal Conservatoire of Scotland. They have been a joy to work with and have supported this show as a presenting partner.

...On what audiences can expect, whether they’re fans of hip-hop, classical or both

They’ll find that it’s surprisingly pleasant. Our audience is mainly concert music-goers but whenever we performed at clubs, people enjoyed it equally. The frame is actually new (I can’t emphasise this enough), in the sense that they really don’t know what this is. I can give you two anecdotes in two different demographics. One was a 75+ year old white gentleman who probably never listened to hip-hop enjoyed the show so much that he walked up to our resident MC saying that he loved the “scatting” (jazz vocal improv). The other was a middle-aged couple who at first said we sounded like the best rock opera ever and then quickly added that we in fact “felt” like Bob Marley’s Wailers. This convinced me that people are seeing something truly new.

...On why hip-hop works so well with other seemingly dissimilar genres

In hip-hop lies Method Sampling – a principle of borrowing and sampling foreign rationales (methods) and by reframing them to come up with new systems as well as triggering innovation within existing systems. Over the course of us building EMN and me writing the pieces, it became clear that this is how innovations occur in general.

Hip-hop will absolutely influence other genres both in visible and subterranean ways. However, let’s get one thing clear. It’s not hip-hop that needs help but other older forms such as classical music. Method Sampling within hip-hop is a completely novel technology in the sphere of performing arts and it’ll be profoundly transformative.

...On the shift in recent years in terms of attention and respect being paid to hip-hop as a serious artform

It’s always the same with new music in the US. “Oh my god, this is destroying our society and corrupting the youth (a la Socrates), blah, blah” then a couple of decades later, “Oh my God, this is the greatest American art with immense cultural merit…etc.” People forget jazz used to be called “jungle music” and “hot music”.

...On why hip-hop deserves a place at major arts festivals like the Fringe

Hip-hop is one of the purest expressions of Method Sampling. It’s essential because we desperately need to get out of the age of decadence we’re in. What I mean by decadence is that everything repeats without any real progress. Just look at the high grossing movies of recent years.

We here at EMN believe that Method Sampling can break out of the cycle and invent new prototypes of structures to usher in a new world… ha, ha that sounds like a cult. But seriously, we do believe it. So much so that we’re making a docuseries out of Method Sampling! 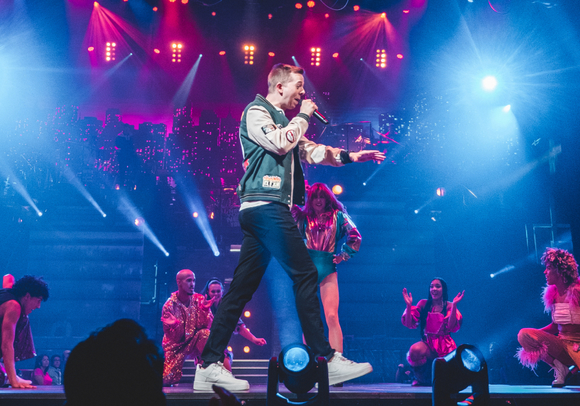 ...On incorporating hip-hop into comedy

When I was 12, my friend Guleed would burn Nirvana albums onto a CD for me, and fill up the extra space with “music that wasn’t shit”. That’s how I started listening to Eminem, Dr. Dre, Snoop Dogg, and soon after I started freestyling, just making up my own lyrics over the beats. A decade later, I was hosting a family-friendly comedy show, and would bring the kids’ toys onstage and make them rap for the crowd, and it got a decent enough reaction for me to start freestyling at the end of my regular shows. At that point I’d been rapping much longer than I’d been telling jokes, so it helped me get booked on more shows, and start to establish myself on the circuit.

...On why hip-hop works so well with other seemingly dissimilar genres

I don’t think comedy and hip-hop are dissimilar – a lot of the rappers that I loved growing up were just as funny as comedians I liked, packing their raps with punchlines and distinct points of view.

It does seem that the current success and cultural dominance of hip-hop has partly come about because of the genre’s ability to adapt and morph to the times. It used to be more common for a number one single to have just a guest verse from a rapper, whereas now so much of popular music either is hip-hop, or at least heavily influenced and inspired by it.

...On why hip-hop and rap are such powerful modes of expression for cultures and communities around the world

Anyone can start rapping – they don’t need an instrument or musical training – so it’s instantly accessible. Humans have been telling stories for millennia, and hip-hop seems rooted in that – the opportunity for an individual to centre their perspective and express themselves, and through doing so communicate with others. I worry I’ve made rap sound incredibly dull and academic, so please note that most of the raps in my show are very silly and often focus on my dislike for people who pronounce espresso incorrectly.

...On the shift in recent years in terms of attention and respect being paid to hip-hop as a serious artform

Kendrick won a Pulitzer in 2018, so evidently yes. Obviously, DAMN wasn’t the first hip-hop record to be worthy of that recognition, and Lamar isn’t rap’s first ‘serious artist’, but it suggests we’ve reached a point where the idea of hip-hop being given the cultural respect it deserves isn’t immediately dismissed out of hand. 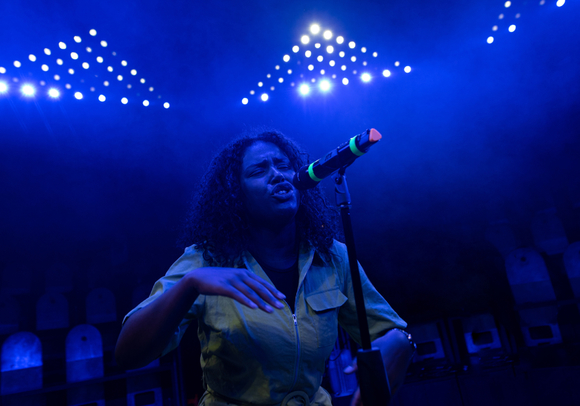 ...On Caste-ing and how the show came to be

Caste-ing was first conceived by Ryan Calais Cameron (Nouveau Riche) who had an idea to develop a show about the experiences of Black actresses, fusing beatbox and rap. We did an R&D as part of Barbican Open Labs before lockdown and we are very grateful to be taking the show to Edinburgh Fringe this year. The show follows the experiences of three Black actresses who are chasing their dreams while dealing with the misogynoir they experience within the industry. It is fun and punchy and filled with black sisterhood, but also poses some serious questions for all involved in the performing arts industry.

...On incorporating rap into the show

As I said, beatbox and rap were always a part of the initial concept when Ryan conceptualised the show. The show doesn't focus exclusively on hip-hop, although there is inclusion of rap, beatbox and spoken word. My entryway into hip-hop is actually from poetry and spoken word – I have always loved the use of wordplay, rhythm and flow. During my Masters, my group actually did our presentations on hip-hop, race and Shakespeare. So we got to delve into the history of hip-hop which gave me a whole new respect for the genre. Hip-hop is a Black music form so when talking about the experiences of Black actresses, it is a form that fits well. And actually, within the show we will be exploring different soundscapes inspired by different music genres that originated from the Afro-Caribbean Diaspora.

...On why hip-hop and rap are such powerful modes of expression for cultures and communities around the world

Firstly, I think music can be such a universal and bonding medium; it's spiritual, it goes straight to the soul. Hip-hop and rap also just has a way of cutting to the heart of an issue, or of an experience. Also, in theatre in particular, I think we are still a bit behind when it comes to incorporating rap and hip-hop. It hasn't quite been explored by enough theatres, or given that much space in my opinion. Particularly in UK Theatres. There is a reason shows like Hamilton have kicked off – Lin Manuel Miranda saw space to meld hip-hop with Latinx heritage and experiences, and everyone said "Yes! This is it!" because it felt fresh and new and excellent, of course.

...On why hip-hop deserves a place at major arts festivals like the Fringe

It is a very powerful medium for storytelling, especially for a show like Caste-ing which is unapologetically Black, raw and honest. Hip-hop has always been about expression and making space. Caste-ing as a show is an exploration of the performing arts industry, by challenging us to make a more inclusive industry.