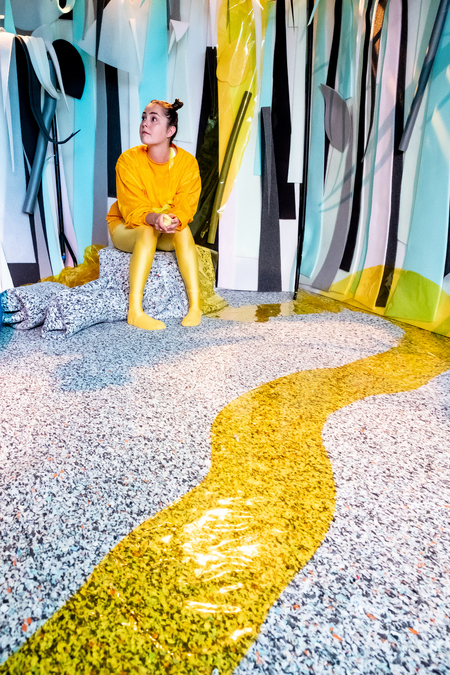 If you're hoping to escape the hubbub of the Fringe with your wee ones, Slime might just be the show you're looking for. Nestled in the heart of Edinburgh Central Library, you'll find a mini foamy woodland where two tiny creatures — a slug and a caterpillar — meet and weather a rocky start to become firm friends. With the help of a little bit of icky slime, of course.

"Everyone thinks that slugs are disgusting," says playwright Sam Caseley from Hull-based The Herd Theatre, the company behind the show. "They kill them quite a lot, even people who are otherwise really lovely kill slugs. So we thought, what could we do with a creature that everyone thinks is disgusting? Then I read a bit about the slime that slugs produce, which is really amazing stuff. I don't think there's any other substance like it on earth, it's sticky and slippery, and of course slugs have a role in the ecosystem."

Of course, the slime in the show isn't real slug slime; it's a homemade, yellow plasticine-y ball of squidge and feels delightful. But Slime isn't just about kids playing about with this bright, doughy toy. Designed for two to five-year-olds, it is a deceptively simple show about overcoming prejudice. First performed as a commission for Hull Libraries last summer, accessibility is baked into the show's DNA. Not only is there very little dialogue, for the Edinburgh show, the company worked with a disability consultancy so the words that are spoken are simultaneously told in British Sign Language as well.

"We worked with an amazing guy called Dan," says Ruby Thompson, Slime's director, "and Dan himself is deaf. He asked us during the process to put headphones on, put loud music on and watch the show, and see how it changes. It made me realise how much we can slow it down."

And performing in a library space breaks down barriers for families as well. "One of our plans for this tour, which is our first," says Caseley, "is focusing on audience development and maybe accessing families that traditionally don't go to arts events, by doing it in these sorts of spaces. Firstly, more people are aware of [the library], and it feels less intimidating than a theatre."

"It feels like more of a day out as well," adds Thompson. "You can just go chill and read a book, rather than coming into town for one hour." She's right; my three and five-year-old friends who accompanied me to the show went along to the Central Library's free Bookbug storytelling session beforehand, and already felt comfortable and settled in the library space before we were ushered into the show.

Slime is part of Hull Takeover, an initiative that supports five theatre companies from Hull at the Edinburgh Fringe, and Caseley and Thompson—who met at drama school—have gradually built up a name for themselves in their hometown as children's theatre experts. But while their initial work was for older children, the early years age group that Slime is made for is their favourite audience.

"They're so unrestrained with their logic," says Thompson. "They're naturally so playful and open, so they will just go with you. Like nothing in this garden looks real, it's very abstract, there's pink grass and a slug that's dressed as a weird slimy raver."

Designed by Rūta Irbīte, the set in Slime is almost a character in itself. Children and adults take their shoes off before stepping into the garden, which is a sensory treat. Almost everything is soft and squishy, encouraging the young audience to get involved, touch things and play. The relaxed vibe carries right through the show, so children can move around, talk and explore during the performance – particularly in the final 15 minutes, when they're invited onto the stage area to play with the slime.

"When we performed in Manchester," Thompson says, "it was a wild party. One kid was just so up for dancing, every time the music came on. For a lot of young people—maybe not at the Edinburgh festival, but where we usually work—it's their first experience of a show, so they're not coming with any preconceptions of what a show is. That's really exciting, and we don't want to tell them how to behave. We're going against these stuffy forms of theatre where you sit down quietly and watch."