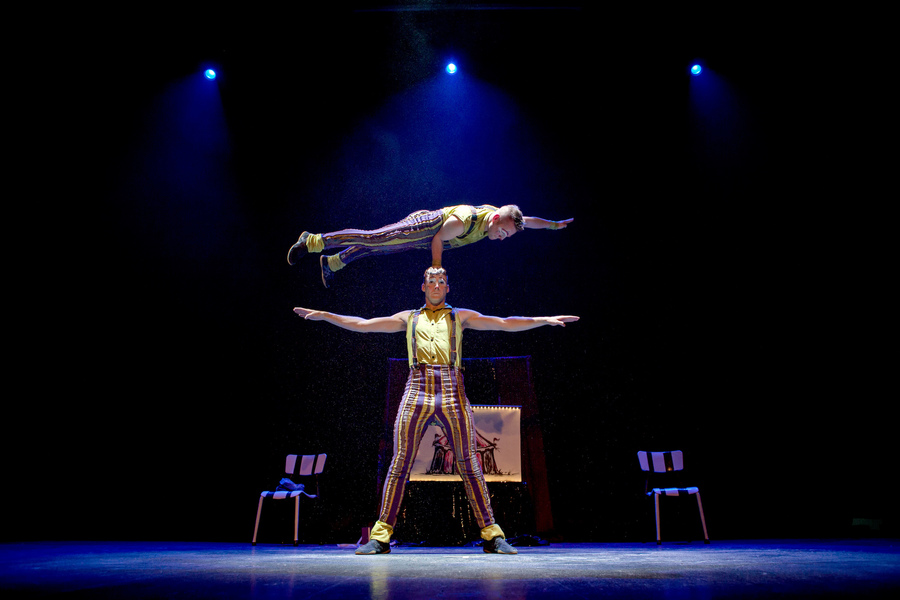 A pair of clowns struggle to work with each other and the audience, but ultimately learn that collaboration allows you to do amazing things. Along the way there’s acrobatics, increasingly complex handstands, diablos and many, many arguments. There are also some brooms, a big plus for this sweeping fan, and the audience is sprayed with water – hilarity ensues.

What did you think about the show?

“Maybe this happens every day. Does it happen every day? Why do we not go to it every day?”

Oran was convinced the shorter man was the child so naturally sided with him against the slightly taller, and possibly younger, man. The characters aren’t overly developed as individuals – it’s mainly about the ebb and flow of the fractious interaction followed by collaborative acrobatic performance.

Oran was grinning from ear to ear at the clowning, particularly the various arguments. Getting sprayed with water was also a hit, and the diablo tricks drew some silent awe.

It's maybe a touch too long for the youngest kids. That said, Oran is under the 5+ suggested age range and pretty much kept it together, on a very very hot day.

If there were songs or music in the show, what did you think of it/them?

In really stripped back staging the music is perfectly selected and used to add a layer of pathos to the clowns’ disputes.

It was fun! I went in feeling nervous about how Oran would respond given we had spent the entire morning arguing and it wasn’t a big pile of LEGO, but he was entranced. Massive relief! Thank you Brotipo!