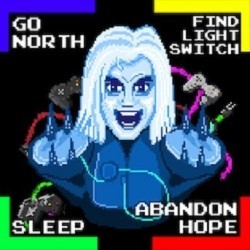 The Dark Room For Kids

You are trapped inside a computer game. You have to choose the correct path to escape. You can win money if you get to the end (although no-one has since 2012), but it is more likely "ya die". Unusual prizes are given out for trying. Someone won a huge rug!

Scary at first then funny.

The presenter is very funny and he has great catchphrases.

It made me laugh, especially when he acted out what the person would do when they entered the room. I thought it would be scary, but it wasn’t at all. What didn’t you like about the show? When you first go in the room it is very dark and the screen says "you will die" so I was a bit scared. The lights never come up and the presenter just uses a torch, but it stops being scary when you realise it is just about being in a game.

My mum thought it was a very different show to anything we had seen before. There were a few swear words in it at the beginning and she was a bit worried it might have been a bit grown up for me. I don’t know why she was worried because I know all those words anyway.

Yes. I want to go again.