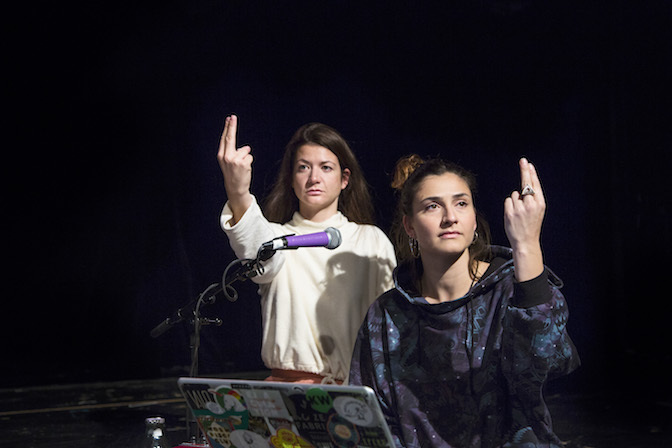 Rossi wanted to change the narrative around sex. "We have a very active feminist performance scene in Finland," she says, "but all the performances are based on trauma." She wanted to find the sex-positive language to talk about what she describes as "one of the last taboos" and open up conversations about pleasure.

Part of Finland’s From Start to Finnish showcase, Ejaculation – Discussions About Female Sexuality is made up of verbatim interviews with women of varied backgrounds and sexual experiences, including sexologists and sex workers. Some of the interviewees, who talk candidly about their experiences of orgasm and ejaculation, are gay or bisexual, but when I ask about this, Rossi bats the question away. "We didn’t want to focus on the partners. We wanted to focus on the experience, the feeling."

Kivi is a musician. As well as working on the audio recordings, she has created a soundtrack that reflects the meaning of the word "to ejaculate" – to hurl out, to shoot out. From the start, the pair were clear they didn’t want any images or video. "Looking is the most common way of paying attention to women," Rossi says. "We wanted to make sure they would be heard."

Be warned: audience participation plays a role. "It starts by asking questions to the audience," Rossi says, quickly adding when she sees my reaction, "No one is obligated to answer." But people do. Audiences so far have been engaged and open in talking about sex, with people of all genders staying afterwards to ask questions about pleasure and performance. The show creates an open, non judgemental space to talk about something most will rarely have given much thought to.

The silence around the topic digs deeper into societal issues with sex and sex education. "The more a child knows about their body parts, what's okay and what's not, the safer they are," Rossi says. "The same goes throughout our adult life." We need to cultivate the language to discuss desires in bed, she argues, in order to maximise our feelings of safety, comfort and pleasure.

Before we finish, yes, I do ask: any tips? "It helps if you can be completely open with the person you are with," Kivi says, "and not scared of what might happen. There's a technique." She starts to wiggle her fingers as if beginning to explain but decides it’s too intricate to show over Skype. "But it’s kind of this pressure down there. It's the moment where you kinda feel like you need to pee, but then you just let go, then it might happen. The main point is to be open for it."

She pauses and laughs. "And it happens easiest if you're on top."

The best of the annual festival of Finnish art...

Mining Director Reetta Honkakoski’s personal experience of living in a cult for several years, this ensemble explore power, discipline and the requirement to obey in a bold piece of physical theatre for ages 8+.

When Ali Alawad’s asylum application was rejected, it completely changed the nature and purpose of his performance with Alpo Aaltokoski. With traditional Iraqi music and Finnish contemporary dance, the pair examine intimacy and separation, with Alawad taking part through video projection.

In this one-woman show, Scottish actor Sarah McCardie plays 11 characters as she tackles the pressures of being a freelance journalist and single mother of four.

An immersive psychological thriller, SHINE puts you in the position of a parent whose daughter has gone missing. The intense experience is designed to trick your mind, test your strength and blur your senses.