Review: Fires Our Shoes Have Made

Lots to like, but this show too often sacrifices sense to lyricism 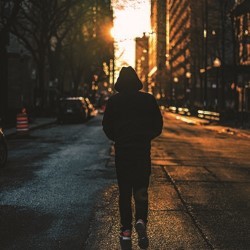 Fires our Shoes have Made

Gig theatre is becoming a crowded field at the Fringe, making it hard to stand out. Oscar Sadler’s new addition to this genre, with original music by Mollie Tucker, is slight but promising, showcasing the energy and potential of young company Pound of Flesh.

Taking place over just one day, Fires Our Shoes Have Made follows 13-year-old Jay and his little sister Saskia—Sassy to him—on their quest for escape. Six months ago, Jay and Sassy’s mum died and they moved in with their estranged father. Now Jay wants the two of them to make a break for it, striking out on their own.

There’s a mythic dimension to the show, as legend becomes entwined with reality. The knife with which Jay arms himself for the journey is Excalibur—Scally for short—and those who stand in his and Sassy’s way are goblins and trolls. For the two siblings, fantasy is an escape from grief and a suit of armour in which to face the world. But as the play goes on, reality hits them hard.

The storytelling combines spoken word, sound, music and song, all performed under mesmerising coloured lights. The show looks and sounds beautiful, but its plot needs some serious work. Sense is often sacrificed to lyricism; the story gets lost in a dense web of startling images and inventive rhymes. The conclusion, meanwhile, feels rushed and underdeveloped. There’s lots to like here—not least the lively performances—but it could do with some honing.