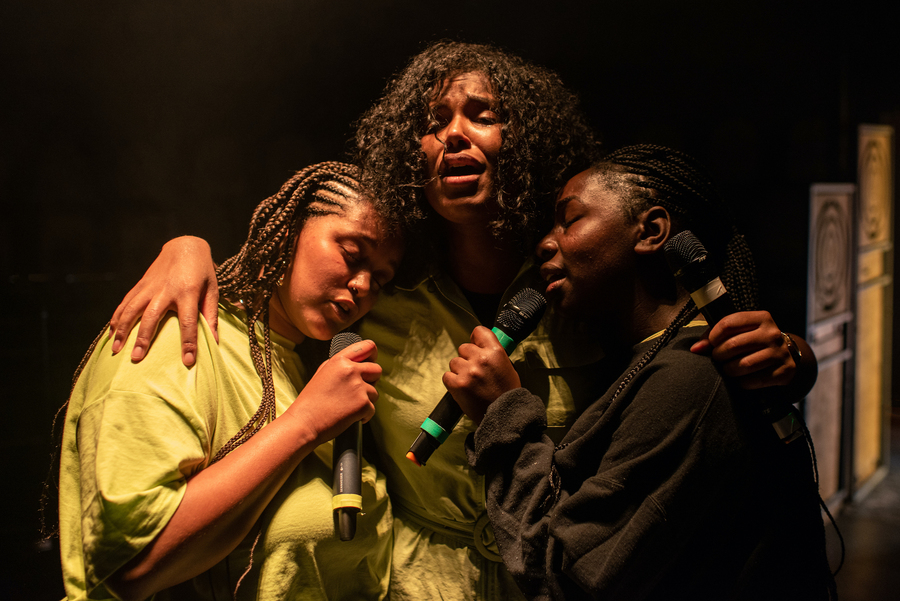 There is something particularly affecting in the way they first take the stage – full and together and ready. In Caste-ing, rap, beatbox, spoken word, and song connect to follow three Black actresses, navigating their industry and all its complexities.

The trio are a delight, their onstage chemistry utterly striking. Attired with accents of green and black, they’re a vision individually and as one. We go through the motions of their precarious careers with them – there’s competition, rejection, objectification, and, of course, downright racism.

It’s not so much a linear story as a series of vignettes, moving from one to the next seamlessly. Throughout, each member takes on multiple roles, charmingly mocking whiteness and all its scripted micro-aggressions. A particular kind of incisive humour carries it and there’s something vulnerable and poignant about the honesty behind each joke. With an admirable grace, it sharpens then softens, softens then sharpens. Here, Black womanhood is allowed to be more than one thing at once, something we don’t get to see all that often. Notably, the show’s discussion of colourism is deftly layered, providing a particularly insightful nuance.

While the theatre in the round fosters a certain intimacy, Caste-ing demands something a little larger. At times, the sound seems capped, the dancing restricted. The trio’s presence yearns for more.

The slight moments where vocals seemingly fall a little flat ensure a musical tenderness and honesty persists. It’s performance without feeling over-performative – precise but not polished to a point of rigidity, making for a truly affirming watch.