Review: Feeling Afraid as If Something Terrible Is Going to Happen 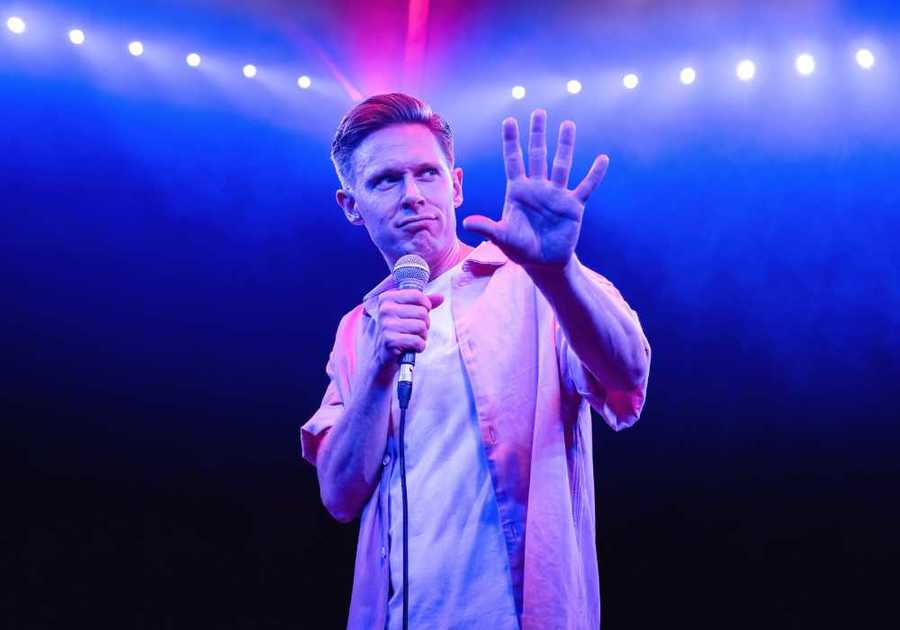 In the round, a stand-up comic turns. We see the Comedy Store-style cartoon grin festooning the back of his pink jacket – the rictus logo of professional laugh-making – as his red Converse trainers shuffle through stances. He grabs the mic to start his set – and restart, and restart, until he gets the opening right.

Our livewire lead, played by Tony- and Olivier-nominated Samuel Barnett (The History Boys), lets us into his love life with confessional abandon. Barnett is immaculate; fully embodying the tangled neuroses of being British, male, gay and a comedian as he traverses the London dating scene. He is utterly convincing as a comic, nailing the requisite inflections, mannerisms and off-stage awkwardness. He does soaring justice to Marcelo Dos Santos’ equally pristine writing, too: self-conscious, naturalistic, by turns wise and fallible, hitting both hilarious and heart-wrenching with winking deftness.

There are echoes of former Moody smash hits – Fleabag, Angry Alan, Baby Reindeer et al – but such box-lumping undersells Feeling Afraid…’s distinct identity. Comedy – as a form – is integral to not just the structure of the show (the monologue is rendered as stand-up, mostly), but also to its examination of presentation, truthfulness, insecurity and mental health. It’s performance about performance, but without any insufferable, try-hard self-awareness. Genuine and captivating, Barnett boasts a well-earned full circumference of laser-locked eyelines from start to end, his self-reflections and second-guessing visibly resonating with every unblinking face.

Like good stand-up, Feeling Afraid… manifests a vivid world, and Matthew Xia’s tight direction brings to life the narrative’s cruel ironies as our star’s relationship unfolds. The title bears obvious portent, but the story is not gloomy. Instead, there is tension, but it’s a tension familiar to any thinking, feeling human navigating love and sex in our frantic, app-yoked lives – and especially to those who use humour to deflect when things get too much. The show's faultless execution is matched only by this audience's thunderous, cathartic, cry-laughing response.