A superbly arch critique of the male ego 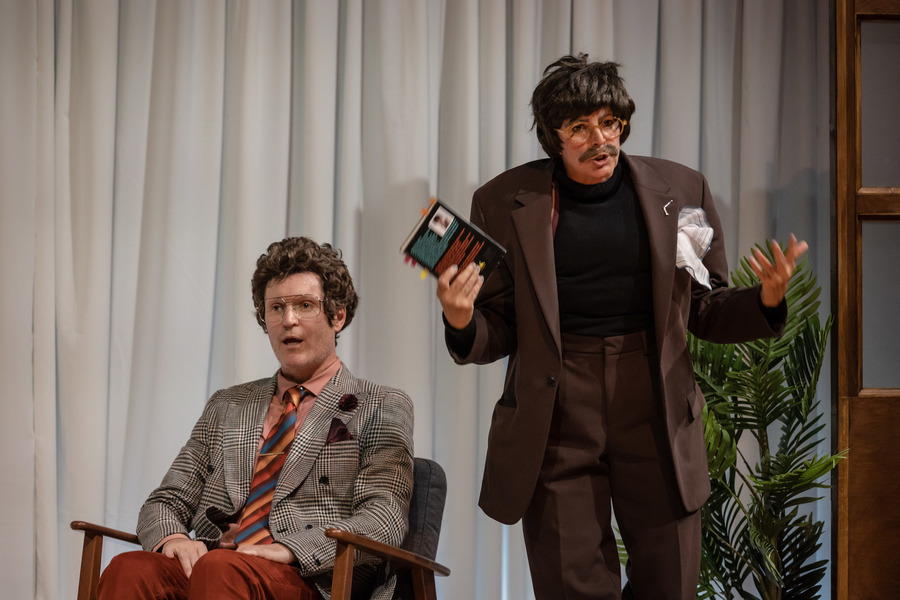 Can we fully separate the art from the artist? How important are intentions when examining the impact of an artist’s work? Can we ever, truly, answer these questions?

Like a reflexologist, Adrienne Truscott finds these knots deep in the muscles of theatre and attempts to work them out. Staged as a highbrow interview in the vein of Inside the Actors Studio, Masterclass pits Feidlim Cannon (Brokentalkers) as the host, all corduroy and tweed, against Adrienne Truscott’s male auteur persona.

Truscott – the man – is a fantastically gross exaggeration, a knowingly arch critique of male ego (both in its bluster and veiled fragility), and an apposite creation to springboard discussions around gender and power in the arts. He is asked about his “alleged” inability to write complex female characters; his responses are a pastiche of those elliptical, kneejerk non-answers we’ve heard in many a hagiographic Q&A.

Cannon shifts between sycophancy and confrontation in his questioning, a changing dynamic sometimes made physical through buffoonery. There’s a cartoonishness to the clowning and sound cues which undermines the seriousness of what’s being discussed, an inspired move that recalls the flimsy, pantomime efforts of cis men discussing issues concerning people who aren’t in the room.

Of course, with Truscott, things are rarely as they first appear. There are passages in the piece’s latter sections which wax much more literal. These could, unfairly, be labelled preachy, but only because there is clear exasperation at how the more nuanced representations of these struggles are misinterpreted or simply ignored. Here, it is done artfully, with justification, thanks to Truscott’s wealth of expertise and passion for both the form and the subject.

The text is dense, but necessarily so; these are not simple problems. But this is, ultimately, a Fringe show; there is tension-relieving fun amid the righteous fury. Even at its thorniest, at its knottiest, Masterclass still shows Truscott relishing in the playfulness of deconstruction.