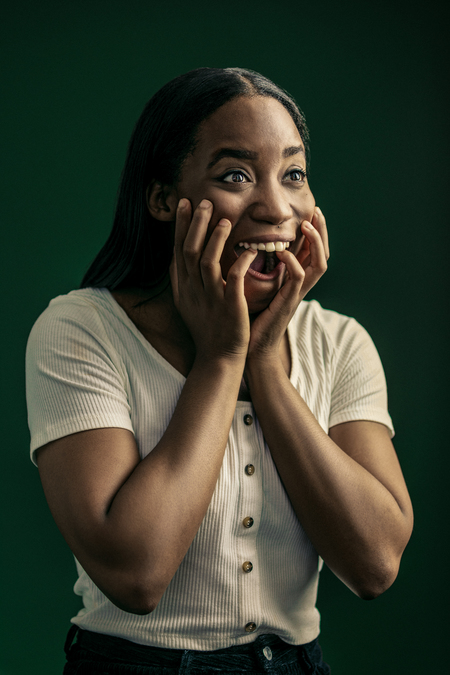 A spate of shows about conspiracy theories. Coincidence? I think not. Surely this is a symbol of post-truth times. Or a product of alogorithms pushing curiosity-pricking specious content up the search rankings and into our eyelines. Or is the Fringe Society up to something? The truth is out there, Edinburgh.

Theatre’s the ideal space for the subject, hovering as it does between fact and fiction, truthfulness and falsity. It exists in a blurry inbetween: an alternative reality built on our belief. That’s the territory being combed by a clutch of young companies.

YESYESNONO’s title is worth remembering: The Accident Did Not Take Place (three stars) attempts to turn an invented incident into a kind of truth. Repeat a lie often enough and people will come to believe it. Convince enough people, and that lie becomes fact.

The show drops an unrehearsed guest performer—an actor—into a plane crash. On a neon pink strip of stage, they’re walked through a routine again and again, re-enacting a fragment of a flight recorder’s final transcript. A transatlantic flight hits unexpected turbulence. An air steward sprints down the aisle. You turn to see smoke and say, "we’re on fire". Another passenger clutches your arm, seeking comfort, as you run forward to bang on the cockpit door. Too late. Again.

With each repetition, this sequence sharpens up. The flight comes into focus. As the three performers add colour—altitude, seat number time—they ask the actor to imagine themselves there, to really feel it, to “make it real". As memories form, body learning its script, the scene speeds up and grows increasingly truthful. It’s uncanny – especially when a video camera closes in to catch the emotions playing across the actor’s face. Is that real fear? Are those real screams?

Intercut with emotion memory games that ask the actor to recall and recreate real-life experiences—some feasible, some fantastical, some so far back they’re fictional—the exercise becomes a study in the slip-slide between imagination and memory. We are, effectively, watching a false memory being forged and a fiction come to glossy, studio-lit life. It’s a study in self-deception and, with deep fakes incoming, that’s deeply disconcerting. Though still a slip of a show, even a rehearsal room game, The Accident Did Not Take Place is as unsettling as it is enlightening.

The three truthers of CONSPIRACY (four stars), Barrel Organ’s new show, hope to unsettle and enlighten too. Recording an amateur podcast, they’re seeking to debunk a widely-accepted truth – proving the famous photo of construction workers lunching on a steel bar over New York as a fake. Pa-pow.

It is actually—at least, initially—a pretty convincing case. The cloud cover is convenient and curiously placed. Only five workers signed into the Rockefeller’s 69th floor, and the shoot contract is signed by an SFX artist. The plot thickens, but as the trio try to tie up their loose ends, their theories take flight into far-fetched fantasies of secret brotherhoods, staged moon landings and a still-living King.

But CONSPIRACY’s less concerned with their theories as their thinking. It’s epistemology: Can we be certain of anything at all? “What do we know?” Rose asks aloud, exploiting the gaps that get exposed – six unknown men sat on that girder; no record of who took the shot; nothing definitive that it wasn’t doctored. Buff up on your AJ Ayer. We can falsify facts. We can’t conclusively confirm. It’s easier to tear down a truth than to stand up an alternative.

CONSPIRACY’s playing an even cleverer game too. Fittingly, it sits on several planes of reality at once – each actor performing on a different frequency. Rose Wardlaw’s definitely acting in character, blinking incessantly and OTT uptight, while Azan Ahmed and Shannon Hayes seem more like themselves. Moreover Jack Perkins’ cunning text has the most obviously fictional character sticking closest to the truth, while the most ‘real’ bounds off into overblown parody. Canny diverse casting complicates things further: Who do we instinctively tend to disbelieve?

Even if it stretches to tie the show together, this is a brilliant theatrical brainteaser that asks us to find the line between credibility and incredulity.

Portents (three stars) tunes into other frequencies too, picking up the signals conspiracists send out. Three black-clad performers stand behind music stands in front of a tin foil moon, reciting a collage of conspiracies: UFOs in Roswell, Avril Lavingne in limbo. Morsels of online chatter, retro talk shows, biblical bits and pieces collect around a series of lonely, late-night phone calls to make a kind of alternative dawn chorus – a nocturnal choir of oddballs and outcasts broadcasting crackpot theories just to connect to some like-minded misfit.

Though sometimes derivative—Fringe twitchers might strike Chris Goode, Chris Brett Bailey and Forced Entertainment off their checklists—there’s something distinctively millennial about Why This Sky’s work too. Below the soothing babble, backed by solar winds and soft pianos, there’s a jarring dissonance: a sense of something seriously amiss. Portents reads the runes, seeing the rise of conspiracists as a symptom of an anxious and uncertain world – maybe even a sign of some impending apocalypse.