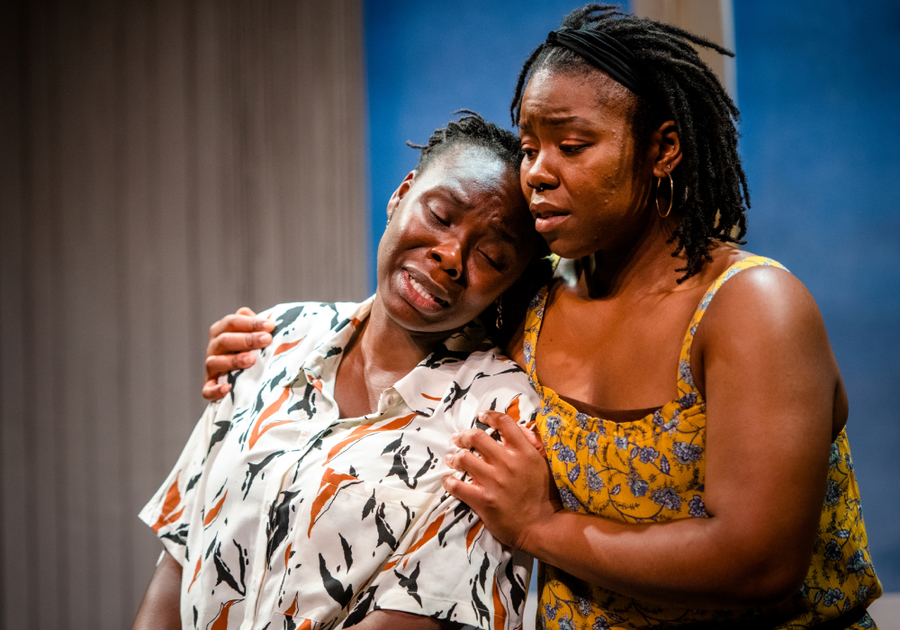 A camcorder sits at the edge of the stage. Its pervasiveness is ever present as the couple go through the motions of their lives, trying to forget that the captured film may determine whether they are permitted immigration status. Abidemi and Omolade have recently come from Lagos to Glasgow, following fears of being outed to their families and communities. The play explores their relationship when under the scrutiny of the UK’s Home Office. When threatened with deportation, how must one perform and record love? And for who?

The stage, their kitchen, holds space for this complexity, with its greying half shut blinds. However – with a few turns of a table, a shift in lighting – this kitchen becomes the Home Office. It’s subtle but nuanced, communicating how the violence of the UK’s immigration policy inhabits the space of those under its assessment.

Narratively, it’s heavy but it’s not dragging. It’s sometimes slow, weighted by moments of this gentle love and by moments of a certain fraught sadness. Punctuated by monologues – textured through sound, our hearing what the characters once heard – this is storytelling at its most transcendent.

For two characters who are at times so detached from one another, their connection as actors is utterly palpable. This active bond, moving in and out of each other, allows for each character to have moments holding the stage alone, creating some of the play’s most striking scenes. Forceful and deeply impactful, it is a necessary watch.