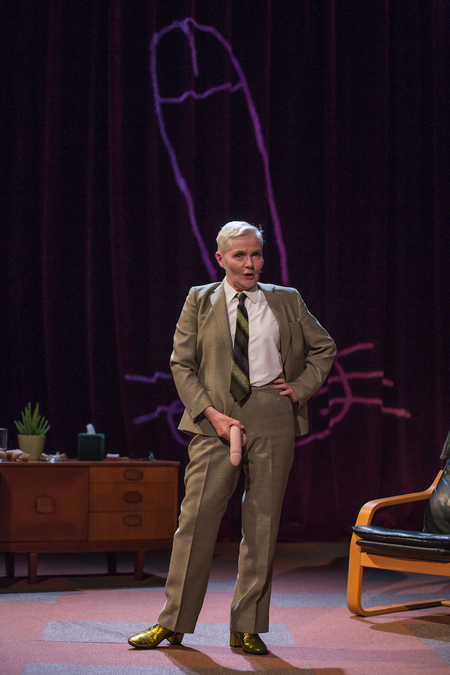 Gina Moxley in The Patient Gloria

Gina Moxley grabs psychiatry by the balls in The Patient Gloria – a rebellion against misogyny masquerading as therapy. “We’re turned on by way more than we admit to,” the impish Irishwoman says at the start. Her mischievous, dick-swinging show seeks to set female libidos free from the male gaze.

In 1960, as psychotherapy peaked, a 30-year-old divorcee "Gloria" agreed to film three sessions with three different—male—shrinks. The Patient Gloria stretches each into surrealism. Liv O’Donoghue lounges on a retro leather sofa in a billowing pink dress as a suited-and-gold-booted Moxley mockingly embodies the quacks. One scurries up Gloria’s skirt. Another bounces boyishly on the sofa. Each looks to camera: the stars of this show.

Picking out the perfect penis for each psych—cotton balls wrapped in tights for the timid fatherly one; lumbering silicon for the fighty Freudian—Moxley’s pastiche is pointed. Her drag’s as distorting as their diagnoses. Beneath, there burns a seething fury. How dare these men project, and push, themselves onto their patients.

Between scenes, as chic rocker Jane Deasy blasts bass-heavy tunes, Moxley reflects on her own social conditioning and sexual past: the childhood instructions to behave and be good, the coy sex ed manuals and the unsolicited penises – flashers, wankers and public pissers. “We got the analogue,” she winks at the teenage girls gathering at her feet. Shock treatment gives way to genuine hope, as Moxley wills the next feminist wave to wash in. G-L-O-R-I-OUS.