work.txt takes on capitalism and wins 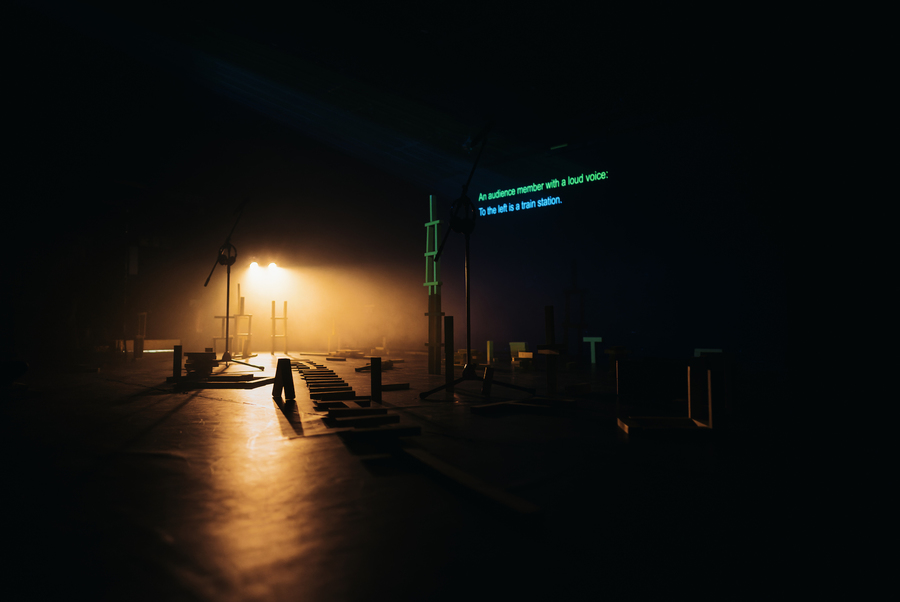 Don’t be scared. The room is mainly dark and the pile of yellow bricks is there for a reason.

work.txt defies the usual categorisation for theatre. It’s perhaps best described as immersive theatre where the audience participates in a working day. In doing so, it questions capitalist systems, the ever imbalanced work-life balance, and the financial instability which refuses to quit. The audience have paid to enjoy their precious free time away from work and suddenly they’re working yet again, with no say – or, more accurately, too much forced say – in the matter, something that’s all too similar to our real lives. This play/experience/thing is utterly hilarious and depressing and somehow even heartbreaking.

It’s experimental, obviously, but it doesn’t leave anyone behind with ugly pretentiousness. Rather, it (or, we) speaks of our relationship with work – how we keep doing it and hating it yet pinning all of our self worth on it – with penetrating insight.
There is something confessional to it, each audience member taking on this simultaneously individual and collective role of the worker. Through this, it’s an exercise in trust: the audience must trust the 'script' to put on a 'show': the script must trust the audience to say and do what needs to be said and done; and, the audience must trust each other, to carry one another through. Frankly, there is something quite beautiful about the collectivity it so forcefully fosters. It’s a joy to be part of.

By the end, the audience’s tone is confused and appropriately so: the text is sinister and it gets caught in the throat with unease, but it’s also brilliantly funny. For work.txt, the phrase “if you don’t laugh, you’ll cry” is a false dichotomy – you’ll probably do both and be grateful for it.

"Is it working?" it asks, again and again. It is working as hard as hustle culture, stagnant wages, and the 50 hour work week – and it is a triumph to witness.