A visit to Henschke Wines 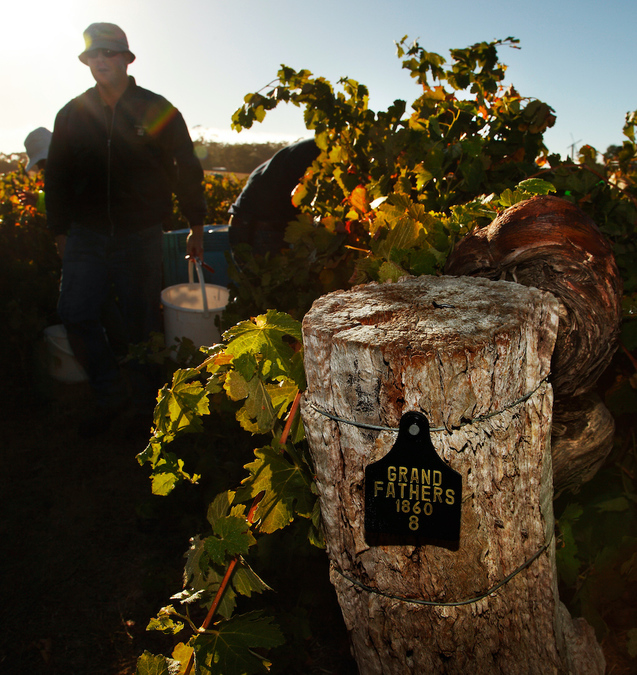 In 1842, Johann Christian Henschke took his wife and children and fled their home of Silesia, modern-day Poland, to avoid religious persecution. Being of the Lutheran faith, Johann Christian decided to move to South Australia on a near 100 day journey, which took the lives of his wife and two of his children. Once settled, he began working in his trades of stonemasonry and wheelwrighting. The buildings which house the current fifth generation family, the concrete fermentation tanks and the tasting room, still showcase Johann Christian’s stonework, and previous wagon wheels can be found adorning the corridor in the tasting room. In the early 1860s, Johann Christian planted the first Henschke vineyard in the Eden Valley to make wine for family and friends.

Of each of the folllowing generations, at least one child has taken great interest in the winemaking on the Keyneton estate. Cyril Alfred, the fourth generation and at the helm in the 1950s through to the 1970s, is arguably the most iconic Henschke. With a quiet yet passionate personality, Cyril Alfred is known for the Mount Edelstone cabernet sauvignon and the Hill of Grace shiraz – both single vineyard varieties using vines over 100 years old. His son Stephen took over the winery in his late 20s with his wife Prue. Together, they still head up the business, with their three adult children becoming the sixth generation of Henschke to be actively involved in the growing and making of wine.

The Hill of Grace, however, is our main focus today. Kylie, our warm and inviting host, drives us to the 4 hectares plot. On the way, we pass the 120 hectares plot which has been purchased by the Henschke family for conservation. Prue Henschke, Kylie tells us, is scientific and systematic with her sustainability practices within all the Henschke owned sites. The conservation site is tended to and natives are planted, but large areas are simply left to be. We meet the Gnadenberg Lutheran Church which oversees the vineyard and is still used for weekly services for the community. The outer fence line of the plot, as Kylie explains, is planted with native species to attract wasps which prey on the Light Brown Apple Moth – a pest in the grape growing area. As we walk among the 152 year old vines, there is a comfortable stillness in the air as the church looks on.

Prue’s mantra of living within the land and not on the land extends to the vineyard itself – with excessive mulching and native grasses to assist in moisture retention of the soil and decrease wind erosion over time. These practices allow for incredibly fertile and healthy soil conditions, leading to exquisite fruit and high quality end product: the Hill of Grace shiraz.

We return to the tasting room and are led into the cellar, which now houses barrels of Henschke fortified wine only available at Communion at the Gnadenberg Church. Kylie then takes us to a private tasting toom to meet the wines, and we are greeted by personalised Henschke booklets with each wine presented along the table in front of us.

We start with the Julius riesling, which is named after Stephen’s great uncle who was a master sculptor and is best known for the National War Memorial sculpture on North Terrace. The Alan Reserve pinot noir is the first wine we come across with the Henschke Vinolok closure. As Kylie explains to us, the glass stopper was trialled by the Henschke family after Prue discovered it in 2004 at a European trade fair as a replacement for regular wine corks, which can be unreliable, and screw cap fittings, which can be misunderstood as a cheaper and inferior alternative. The Vinolok closure is a glass fitting which preserves the wine’s colour, aroma and structure over a longer period of time, and can be recycled. Ultimately it was selected by Prue as a more sustainable alternative.

At the halfway point in our tasting experience, we move in the Henschke Centenarian wines. The Mount Edelstone single vineyard is where we begin. The vineyard was originally planted by Ronald Angus, a descendant of George Fife Angus who played a significant role in founding South Australia. The 103 year old vines produce a rich, complex shiraz with body, but is light and joyful in the mouth.

We are invited to try the 2014 Hill of Grace – a vintage "graced by beauty". To describe the taste and the textural feel of this wine would be doing it a grand disservice. To have stepped off of the vineyard itself, after learning about the generational love of winemaking in the building, crafted by Johann Christian himself over 150 years ago, is an incredibly important factor in the encompassing experience of the tasting of the wine. That’s not to say that the wine isn't the finest shiraz we’ve ever tasted, but that it carries so much more with it than tasting notes and mouthfeel. This wine, and the family who makes it, is a testament to perseverance, community and sustainability.

Each bottle of Henschke wine carries with it a unique history and story. These wines were originally made over 150 years ago to bring people together and to enjoy each other’s company. This belief has remained strong through the Henschke bloodline for six generations. To taste a Henschke wine is to revel in the successes of some of South Australia’s earliest free settlers.

Thank you to Kylie Rosenzweig, Justine Hentschke, Emalee Guerra, and the staff at Henschke Wines.