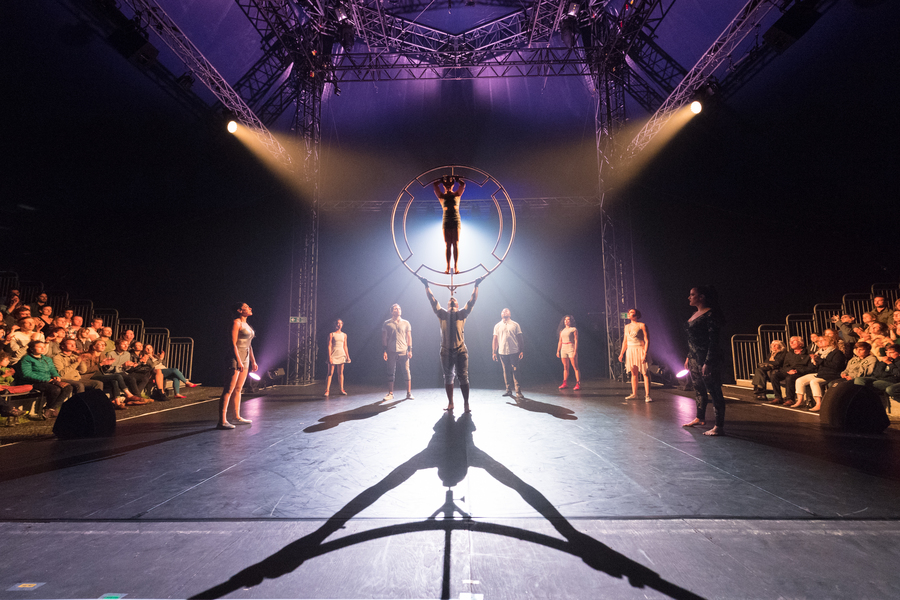 "Because it’s the best!"

Despite her croaky sore throat, Felicity Simpson is effusive and animated over the phone, as we speak between Adelaide and Bogota, Colombia. I’ve just asked her: "Why circus?"

"We don’t have to talk, we don’t have to fart around," she says. "It’s low-to-high brow now. Above all it’s this incredible mixture: you can have these amazing acrobats flying everywhere taking up all the space, or you can have this singular moment of one person on a suspended tightrope right up high. There are different kinds of pacing you can play with – you can have such fun. And that can delve the public into much stronger emotions and radical changes."

Simpson is the founder, director and creative producer of Circolombia, a South American circus company bringing festival firecracker Acéléré to the Adelaide Fringe. What makes the company so interesting – and important – is its sister institution Circo Para Todos (‘circus for all’), which is not only Colombia’s national circus school, but also the world’s first professional circus school for disadvantaged youth. It has a 100% success rate of graduates obtaining professional work many of whom transfer directly to Circolombia.

She tells me 25 of them have now bought their own houses. I ask if there’s something unique about circus to make it so effective at transforming the lives of kids from disadvantaged backgrounds.

"It’s really simple," she explains. "It’s the balance between achievability and challenge. That makes it really appetising and exciting. Plus, with circus, you can’t do it half-heartedly... You’re either really into it and you get excited, and you try and get to the other side of your wire walk, or you fall, and you don’t grab the trapeze with two hands."

She elaborates: "Originally the school was for people that really didn’t have an academic background – hyperactive people like me and Hector Fabio when we first started it. I was crap at school! I couldn’t sit down in a classroom. I still can’t sit down, walking now with you on the telephone."

She’s quick to stress that the students aren’t "off the streets"; there is a casting process and community workshops. And since becoming national in 2006, the school has agreed criteria with the Ministry of Culture and Ministry of National Education (no more than 25% of its enrolments can be from economic backgrounds other than disadvantaged).

There is another facet to the circus discipline: that of a community, or family, that inevitably grows within and between troupes. Simpson agrees. "With our type of circus, everybody is irreplaceable. It really is like a family member. We don’t 'step into roles', the show is built around that person’s competences, that persona, who that person is. So if I change an artist, that show changes form. Whereas in theatre, you can change who is gonna do Hamlet, or with dancers fitting into a choreography. They can be really nasty, as razorblades in shoes, because the competition is so different. But with circus we have that security of being a family."

Simpson remarks on the cultural differences between South America’s fiery, soulful energy – something channelled with gusto in Acéléré – and other countries around the world. "Often in Europe there’s almost a recession of the soul," she posits – and not without apology.

"But at the same time our artists do really well outside," she clarifies, "but not knowing how to place themselves: 'Are we first world, are we third world, what are we? And what are we as artists?' And so Acéléré is that whole question of running forward and you’re not quite sure if you’re going to jump off a cliff or not!"

That said, she is keen to be back in Adelaide. "We’ve been dying to return because Australians are the best public on the earth!"

The show itself, she assures, is a relentless display of passion and verve, mixing jaw-dropping stunts and high-energy Latin American music. I tell her I’ve seen the promo video, which she is quick to dismiss. "I don’t think the video does us justice, to tell you the truth – you’ve got to see it live. We’re not a video, you’ve gotta be there, 'cause it’s a circus concert. You’ve gotta bring your ears out."

Simpson is also intent on highlighting the cast’s "very strong individual and collective charisma, coupled with an authenticity of the artists, which gives a genuineness that’s rare in contemporary circus. There’s no soul sucked away – they’re there. They’re there and they’re themselves"

The troupe will be landing in Adelaide a week before the show opens. Will that be enough time to prepare?

"That’s the amazing thing about Colombians, they are ever-ready," she attests. "They’ve got more batteries than Duracell."