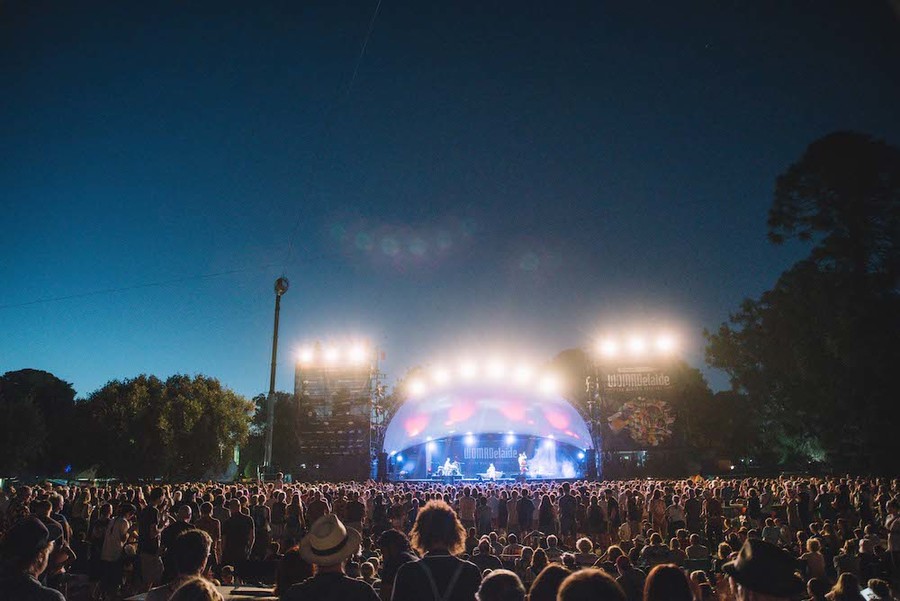 A light breeze through the flags softens the afternoon sun as a third generation of the Goldsmith family joins their father onstage for the annual Kaurna Welcome. [Justin McArthur]

Master Japanese psych-teasers Kikagaku Moyo tread a humble line of guitar-driven hypnosis, enticing the audience with their special brand of stoner psychedelica. These psych-rock rupunzels put some serious mood work into their first down-tempo tracks. The crowd is tempted and taunted by the soon-to-come elation of an up-tempo switch. They seem to flash the jewels – but just as quickly stuff them back in the sack. Once the gently droning riffs break and their bolder sound comes to the fore a sense of euphoria comes over the dancers and swayers. Ryu Kurosawa’s electric sitar gives Kikagaku Moyo (which translates as geometric patterns) an ethereal quality. This adds an element of mystique to the performance. While not strictly a ‘jam’ band they have a beautiful collective playfulness. Their chemistry as a whole is something to behold. All this, presented with their ever-smiling modesty, makes them an undeniable force in contemporary psych-rock. [Edwina Sleigh]

Friday is an evening of long legacies. On the Foundation Stage, the bring seven decades of gospel (decked in silver suits) before veterans The Cat Empire launch into two decades of jazz and ska. The real treat is the Empire’s encore, reprising songs they hadn’t played since the 2000s. “These songs help us remember where our heads were at when we first played WOMAD,” says frontman Felix Riebl, jumping into the songs ‘Hello’ and ‘Chariot’ (both off their self-titled 2003 debut). It gives the weekend some momentum. [JM]

This is one of the only places in the world where you can find the elderly gettin’ down 'n' dirty to drum 'n' bass. General Levy, a stalwart of the jungle massive scene, brings his infectious, up-tempo energy to the Frome Park Pavillion. This drags anyone and everyone into his raucous globe of mayhem. A few renegade fans clamber onto the stage. They are as rambunctiously embraced by General Levy as he is by the enamoured crowd before him. [ES]

Aldous Harding isn't here to seek approval. She’s come to casually obliterate our cultural expectations of the female performer. Her crazed, wide-eyed stares and possessed, angular body movements present something other than the sweet, doe-eyed folk singer we are familiar with. There’s a scary and harshness to her demeanor that's both unnerving and deeply satisfying. The crowd cautiously lulls into acoustic songs with beguiling melodies and warm tones. She articulates her lyrics with a homemade tang. The genius of Harding’s take on folk-music is perfectly paired with this sublimely perturbed character. A character who sits with legs unashamedly spread, on-stage. Even the afternoon sun that hits the west facing stage can’t deter her musical and lyrical prowess. “This one’s for me,” she proclaims before playing her last song. She taps at a coffee cup like a cow bell, singing: ‘Old peel, no deal, I won’t speak if you call me “baby”’. It leaves us yearning for her to give us more. [ES]

Day 2 is full of large ensembles. The Minyo Crusaders, Public Opinion Afro Orchestra and Liniker e os Caramelows all play in short succession. But the big surprise is the burgeoning crowd that surges around the Zoo Stage at 8:30pm. A crowd here for local boys Dr Piffle & the Burlap Band, reuniting after a five-year hiatus. Their acoustic shanties prove unmissable at such close quarters. At the head of their chorus is Jed Altschwager, the energetic multi-instrumentalist and would-be Paralympic rower. He leads the band on his accordion (alongside didgeridoo guest Owen Love) for their finale: a cover of Goanna’s ‘Solid Rock’. [JM]

In 2011, Beyonce prophesied that girls would run the world. Nine years on, a magnetic crowd waits beneath the pines while Spinifex Gum is fulfilling the prophecy. The awe-inspiring squad of Indigenous teens, who make up Marliya from Gondwana Choirs, are taking us on a fervent, politically-charged journey of choral protest. Joining them are Felix Riebl and Ollie McGill of The Cat Empire, who wrote and produced the music. And there’s Australian superstar rapper Briggs. With tough, pop-vocal war cries for the twenty-first century, these songs, which have burned their way into Parliament House, are performed before us with a heart-wrenching urgency. They hit hard at mining companies, police brutality and the power of sisterhood. A united sense of pride surges through the crowd. We witness the formidable strength of their collective harmonies. It’s a call to arms for Indigenous rights that can’t be ignored. Every song is punctuated with velvety vocals and heavy, home-made beats. Without a doubt, these cries for cultural change by young Indigenous women deserve to be heard.

After the sun sets, out of the darkness, a new kind of traffic light emerges. Three bodies kitted out in red, green and blue boiler suits take to the zoo stage. There’s nothing amber or ambiguous about Dyson Stringer Cloher. There’s no vague orange stagnancy. They’re a well-oiled machine that smash through songs from their EP and self-titled debut album. And they do so with a finesse that has the surrounding crowd in a frenzy. Guitars are flung on and off over their shoulders, inspiring young eyes onto their rocking guitar riffs and lush harmonies. The guitars are then discarded and all three sing a jaw-dropping a capella piece. [ES]

It’s International Women’s day and we’re spending it with Jan Fran. Known for her witty and well-researched reporting, Fran has long been at the forefront of commentating on women’s issues by exposing aspects of inequality through eye-opening statistical evidence. Today’s no different. We’re hit with a bunch of stats that almost seem insane. Such as how pregnancy problems are the leading global killer of girls aged 15-19. We’re also hit with some of Fran’s own personal vignettes, including her years as a teen in an ‘ocean of estrogen’ with six female family members and her dad. Wearing a boisterous yellow mumu that reads ‘Suburban Trash’ on a farmer’s union iced coffee, Fran is simple with her requests: treat girls the same way you treat boys. That’s it. From the corporatisation of feminism to the creation of the term ’vagwashing’, we’re in hysterics. And to all the men in the audience Fran says: “Guys you should be happy we want equality, and not revenge.” [ES]

KermesZ á l’Est kicks off a 1pm dance party under an explosive trumpet of confetti and a fishing line disco ball. The street performers cover the width of the festival’s biggest stage, mostly by running about, hair flailing, like Animal from The Muppets. They may be too brassy and acoustic for most metal festivals and too loud and bizarre for most folk shows. But they are perfect for WOMADelaide. [JM]

The glare of the fading afternoon sun is nothing compared to the heat brought out by the Ezra Collective boys. This five-piece wagon takes off at full-pelt and doesn’t let up. Pioneers of a new-wave of UK jazz music, their sexy cross-pollination of genres reverberates beneath the trees. The crowd rupture in delight.

Joe-Armon Jones, who at first glance looks as though he’s rolled out of bed from the London winter, proves why he’s considered to be one of the most prolific keyboardists. His fingers are an unstoppable and unrivaled rampage into a reinvention of jazzy blissfulness. [ES]

Briggs once again ‘steals the festival’ on Sunday night. The cameos begin the moment he walks onstage, flanked by Frenzal Rhomb guitarist Lindsay 'The Doctor' McDougall and True Vibenation on brass. Throughout, he brings out NZ rapper Savage, fellow Sunday acts Thandi Phoenix and Ngaiire, and finally AB Original collaborator Trials. That’s enough cast members to bring out Briggs’ knack for theatre, especially his love for dramatic shifts in tone. With samples ranging from Wagner to the Notorious B.I.G., it is poignant when Briggs samples Dr Geoffrey Gurrumul Yunupingu (who 'taught me how to breathe fire') on ‘The Children Came Back’, chorusing 'I’m Gurrumul, I’m Archie, I'm everything you ask me' on the same stage where Gurrumul performed solo in 2009.

“Where my nungas at?” asks Briggs at the top of the show – and a small chorus up the front came back, “Pitjantjatjara! Kaurna!”. A song later, and most of the affluent crowd are waving their arms in the air against the dripping sarcasm of Briggs’ most recent single, singing along to 'My life is incredible/Being white is incredible'. This is thanks to a deft piece of bait-and-switch crowd work (reminiscent of Tim Minchin’s 'I Love Jesus'). [JM]

Day 4 begins with some much-needed recovery music. Deline Briscoe sings jazzy Yalanji lullabies under a choir of bats – including a cameo from William Barton. [JM]

Odette is a superstar in the making. She rises before an eager crowd, nestled into the shady east of Botanic Park, a sorceress of the spoken-word; a soulful queen soaring beyond millennial mayhem. The stage ignites as she moves through her set. At one point admitting: "I’m dancing more than an asthmatic girl should be dancing". And despite neo-soul roots, she gets down on her knees and thrashes her head around like a hard-core rock 'n' roll legend. "I don’t think I’ve ever been this comfortable at a festival," she reveals, "Thank you for creating such a safe place." And we realise then that the magic here extends beyond the warm, jostling bodies that make up the crowd. It magnetises the stages too, and all the artists who pour themselves out on them.

Crowds hustle together on Monday afternoon to savour the final cards dealt across the parklands. Mavis Staples holds a full-house in her hands as she throws down soul and gospelism. At 80 years old, she casts out songs from her 2019 album, We Get By, with her iconic deep, husky voice. And not forgetting that bluesy rhythmic swagger we all know so well. She calls out to her ‘lemonade’ crowd and has everyone howling back at her like a pack of loyal canine disciples. Mavis is equal parts singer and activist. She continues to be an advocate for change, jesting at running for president: "I’m gonna go up to that White House. I’m gonna find that little boy up there. I’m gonna grab him by that red hat, and I’m gonna smack him." [ES]

For those still needing to recover by the evening, the Welsh harpist Catrin Finch and Senegalese kora player Seckou Keita offer complex and intricate rhythms against a pink sky. It is entrancing as day turns to night. [JM]