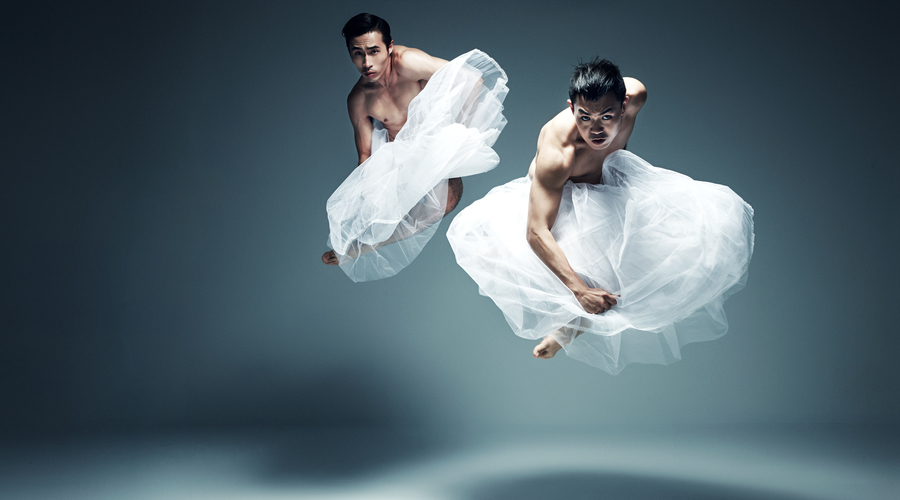 How fortunate we are, to have recourse to art in order to help process tragedy. As a child, Taiwanese choreographer Po-Cheng Tsai frequently attended the Ghost Festival with his father – a Buddhist ceremony held for luck, happiness and absolving the dead. He would write wishes on paper lanterns, releasing them down the river. Since his father’s passing, Tsai has steered clear of the event, until renewed inspiration struck.

Floating Flowers is his catharsis writ large. An eight-strong troupe, clad in distinctive, billowing tulle skirts, are those same Ghost Festival lanterns. By turns beautiful and pained, this is an athletic rush of movement, shot through with snatches of serenity and humour.

The skirts are no doubt the calling card here. They sometimes amplify, sometimes hinder, the dancers’ movements, bearing a personality all of their own. The cast fuss and rustle with them, strutting flamenco-like, swishing balletically, switching from contemporary dance to more traditional folk repertoires. A key gesture is the almost childlike raising of the skirts up to the face, repeatedly anonymising the dancers down to their lantern emblems – or simply as an impish game of peek-a-boo.

For Tsai has coded a liminal study of grief here, with all its conflicting emotions. Neither simply sad nor happy, Floating Flowers wrestles with its own state, the dancers breathlessly cycling through steps—often in complex groups, but sometimes in solos, sometimes duets—as if hoping to shake out the pain. Breathless for us, too; at times the heady barrage can be unmooring. But the score (mainly strings, occasionally thumpingly electronic) and deft lighting keep us tethered until the finale. We endure the process, with all its smiles, tears and sweat, and like true grief, this cannot be fully resolved.