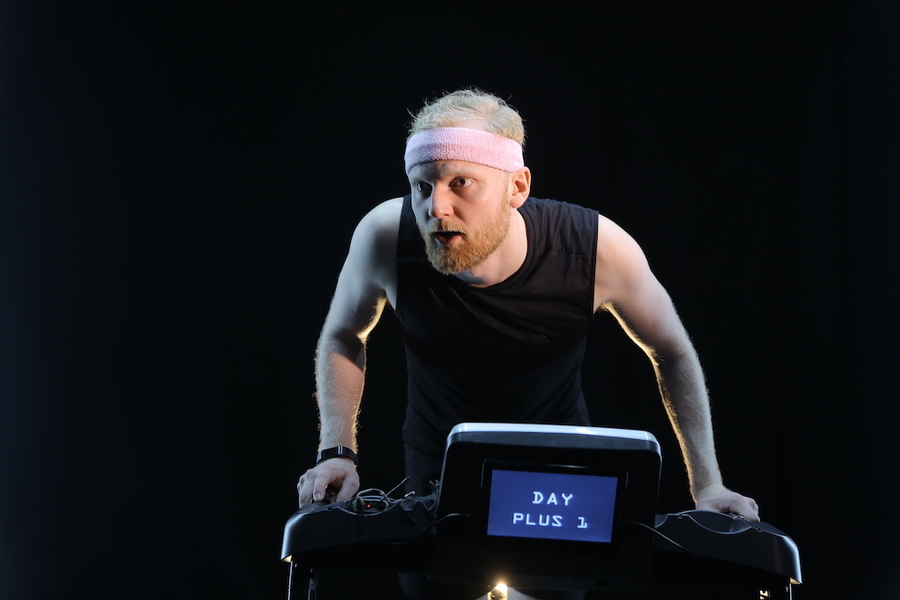 Sweat flies off Max Keeble's forehead. He has been racing for an hour. In Line Mørkeby’s one-man show, a father runs as a coping mechanism, having lost his 6-year-old daughter to leukemia. On a running machine placed centre stage, Keeble rarely takes a break. The rotating thread of the machine is a constant reminder of his endless grief.

He is running away from his family, away from dealing with his emotions and away from the life he no longer wants to live without his daughter. But he is also running to feel alive again. Keeble sweats and pants and his face creases from the effort of trying not to cry. Based on a blog by Danish journalist Anders Legarth-Schmidt, Mørkeby’s script (with translation by Kim Dambaek) switches between images of Ellen, the daughter, dancing and laughing, and her corpse being taken away. A screen on the front of the running machine tells us where we are: how many days before or after her death.

It is an effective conceit and a worthy call for talking more openly about death and grief. The script relies on heavy metaphors and cliches, but it makes you appreciate some level of what a parent who has lost a child goes through just to get up. The relentless patter of Keeble’s feet thumping and the machine whirring give the piece a sense of urgency, like hope desperately trying to claw up out of the misery.

By the end of the hour, when legs ache and calves start to shake, we begin to see a bud of possibility, and hope that one day, this father might get to the point where he can stop running.